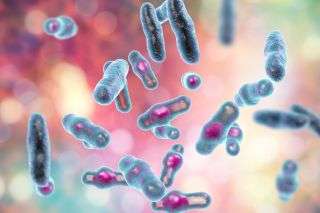 An illustration of Clostridium perfringens bacteria. This bacterium is one cause of myonecrosis, a “flesh-eating” infection that destroys muscle tissue.

Seven people in San Diego have died in recent months from a “flesh eating” infection tied to use of black tar heroin, according to health officials.

On Wednesday (Dec. 4), the San Diego County Health and Human Services Agency announced that nine people in the area had been hospitalized with a serious infection called myonecrosis over a two-month period (from Oct. 2 to Nov. 24). Of these, seven died. The patients ranged in age from 19 to 57 years, and all had used black tar heroin, according to a statement from the agency.

Myonecrosis is a rare bacterial infection that destroys muscle tissue, the statement said. Often, it is caused by a type of bacteria called Clostridium, which releases a toxin that causes tissue death, according to Healthline. These bacteria also release a gas, and the condition is sometimes referred to as “gas gangrene.”

The condition can spread quickly in the body, and lead to amputations or death, according to the statement. Symptoms often include severe pain around a wound or injection site, swelling, blisters with foul-smelling discharge and skin that turns gray, dark red, purple or black.

A different infection called wound botulism, which attacks the body’s nerves, is also linked with black tar heroin use. In October, there was also one case of wound botulism reported in San Diego, which was the first reported case in the area in 2019, the statement said.

The sources of black tar heroin in both the myonecrosis and wound botulism cases are unknown, the statement said. An investigation in ongoing, and additional cases may be reported.

Rachael has been with Live Science since 2010. She has a masters degree in journalism from New York University’s Science, Health and Environmental Reporting Program. She also holds a Bachelor of Science in molecular biology and a Master of Science in biology from the University of California, San Diego.

Dogs, horses and cats left to starve to death in ‘one...

Chaco Canyon’s famous ‘tree of life’ might have just been a...