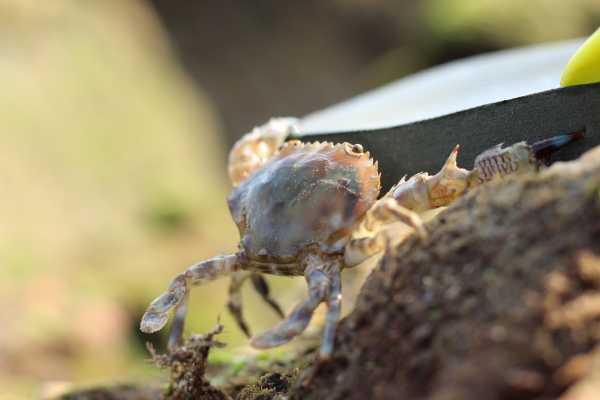 Humans have pumped about 2 trillion tons (1.8 trillion metric tons) of carbon dioxide (CO2) into the atmosphere since the start of the Industrial Revolution, and the ocean has absorbed about 25% of it.

This glut of greenhouse gases not only warms the ocean (contributing to more-frequent heat waves and severe weather), but also changes the water’s chemistry, slowly acidifying it and reducing the concentration of molecular building blocks that shellfish, corals and other marine life use to craft their hard outer shells. According to a new study, that molecular mix-up is already having harmful effects on the development of some baby crabs.

, marine scientists funded by the National Oceanic and Atmospheric Administration (NOAA) studied 50 larval Dungeness crabs (Metacarcinus magister) collected from 10 sites near the Pacific coast of the United States and Canada. Overall, crabs collected closer to the coastline, where oceans tend to be more acidic, were in much worse shape than crabs collected farther out a-sea.

The acidification corroded the larvae’s shells, stunted their growth, and, in some cases, damaged or destroyed the animals’ tiny sensory organs known as mechanoreceptors. All in all, the researchers wrote, acidification left larvae smaller, weaker and less likely to survive into maturity.

The condition of these crabs — which are an important source of food for both humans and other marine creatures — should be a wake-up call to the dangers of acidification,  lead study author Nina Bednarsek told CNN.com.

“If the crabs are affected already, we really need to make sure we pay much more attention to various components of the food chain before it is too late,” said Bednarsek, a senior scientist with the Southern California Coastal Water Research Project.

In the new study, Bednarsek and her colleagues investigated each larval crab using a variety of methods, including microscopy and X-ray spectroscopy (a technique that uses X-rays to determine the chemical composition of an object).

The team noticed clear “structural deformities” in the shells of crab larvae gathered from the most acidic habitats. Those deformities could make the larvae less protected against predators. These same crabs from acidic locations also tended to be smaller than those from less acidic environments, and some were missing some of their hair-like mechanoreceptors, which crabs use to navigate the sea.

The effects were most severe in crabs who had spent more than a month living in acidic coastal waters. The reason for this, the researchers wrote, is that more-acidic waters have fewer carbonate ions, the molecular bricks that shellfish and corals use to build their exoskeletons. Other marine animals, like clams and oysters, rely on the same ions to thrive.

If those animals are being similarly impaired by the acidifying ocean, it could make for a problem spanning the food chain, the researchers said. Either way, they said, the only solution is to reduce carbon emissions as much and as fast as possible.