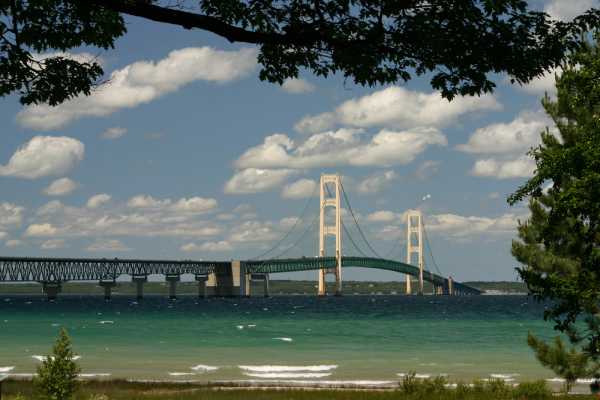 The Great Lakes — Superior, Huron, Michigan, Ontario and Erie — make up the largest body of fresh water on Earth, accounting for one-fifth of the freshwater surface on the planet at 6 quadrillion gallons. The area of all the Great Lakes is 95,160 square miles (246,463 square kilometers) and span 750 miles (1,200 km) from west to east. The square mileage is larger than the state of Texas.

The lakes, called “the nation’s fourth seacoast,” are on the U.S. and Canadian border, touching Ontario in Canada and Michigan, Wisconsin, Minnesota, Illinois, Indiana, Ohio, Pennsylvania and New York in the United States. As of 2017, more than 30 million people live in the Great Lakes basin, according to the Environmental Protection Agency (EPA). This equates to 10 percent U.S. residents and 30 percent Canadian residents. More than 3,500 species of plants and animals inhabit the Great Lakes basin, as well, including 170-plus species of fish.

Today, the Great Lakes are popular recreation spots for boating, fishing and other recreational activities, and they still serve as an important mode of transportation of goods, but they have not always been in their current form. About 14,000 years ago, the Great Lakes area was covered with a glacier that was more than a half-mile (1 km) thick. As the glacier melted, it slowly moved toward Canada and left behind a series of large depressions that filled with water. These formed the basic shape of the Great Lakes, and about 10,000 years ago the Great Lakes took the form that is familiar today.

While the area had been inhabited for a very long time before European explorers arrived, Étienne Brûlé (circa 1592-1632), an advance man for the French explorer Samuel de Champlain (circa 1567-1635), is generally credited as the first European to discover the Great Lakes. Brûlé is believed to have reached Lake Huron around 1615, and went on to explore Lake Ontario, according to the Canadian Museum of History.

The Mackinac Bridge connects Michigan’s Upper and Lower Peninsulas at the straits between Lake Huron and Lake Michigan.

There are a number of rivers and tributaries connecting the Great Lakes. The Straits of Mackinac connect Lake Michigan and Lake Huron, and there is such a steady flow of water between these two bodies that they could be considered one lake. Lake Erie and Lake Ontario are connected by the Niagara River, including Niagara Falls. The St. Lawrence River connects Lake Ontario to the Gulf of St. Lawrence, which leads out to the Atlantic Ocean.

The Great Lakes are dotted with more than 35,000 islands. While many of the islands are small and uninhabitable, the largest is Lake Huron’s Manitoulin Island (1,068 square miles or 2,766 square km), which is also the largest island in any inland body of water on the planet.

There have been a number of shipwrecks on the Great Lakes, as storms and reefs can make navigation treacherous. The last and one of the most famous shipwrecks was that of the SS Edmund Fitzgerald, a freighter that sank in Lake Superior during a storm on Nov. 10, 1975, killing the crew of 29.

The lakes have been changes considerably from pollution and invasive species. Currently, there are more than 140 federal programs designated for environmental restoration and management of The Great Lakes, according to the EPA. Eight U.S. states, Canada and 40 Tribal Nations are part of the initiative to clean up and protect the lakes.

Lake Erie: The name was derived from erielhonan, the Iroquoian word for “long tail,” which describes its shape. It is the fourth largest of the Great Lakes when measured in surface area (9,910 square miles / 25,700 square km.) and the smallest by water volume (116 cubic miles / 484 cubic km).

Lake Huron: Named for the Wyandot Indians, or Hurons, who lived there. Lake Huron is the second largest Great Lake by surface area (23,000 square miles / 59,600 square km) and has the longest shoreline (3,827 miles / 6,157 km), taking into account its many islands. 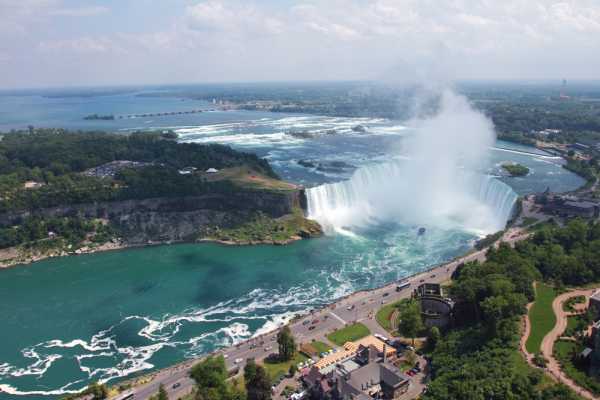 A view of Niagara Falls (Horseshoe Falls) from the Canadian side.

Lake Michigan: This is truly a great body of water, as the name is derived from the Ojibwa Indian word mishigami, meaning “large lake.” However, it is only the third largest of the Great Lakes when measured by water surface (22,300 square miles / 57,800 square km). It has an unusual water flow that goes in almost a cul-de-sac formation, moving slowly in a circular pattern. It is also the only Great Lake located entirely in the United States. Michigan and Huron are actually two halves of one body of water, though, according to the University of Wisconsin.

Lake Ontario: Ontario is the Huron word for “lake of shining water.” This lake is the smallest of the Great Lakes when measured in surface area (7,340 square miles / 18,960 square km). While it is similar in width and length to Lake Erie, it is much deeper and holds about four times the water volume (393 cubic miles/1,640 cubic km). Situated downstream from Lake Erie, Lake Ontario is at the base of Niagara Falls.

Lake Superior: At 31,699 square miles (82,100 square km), it is the largest in surface area and in water volume (2,903 cubic miles / 12,100 cubic km), thus earning it the name Lake Superior. The name comes from the French word lac supérieur, meaning upper lake, as it is north of Lake Huron.