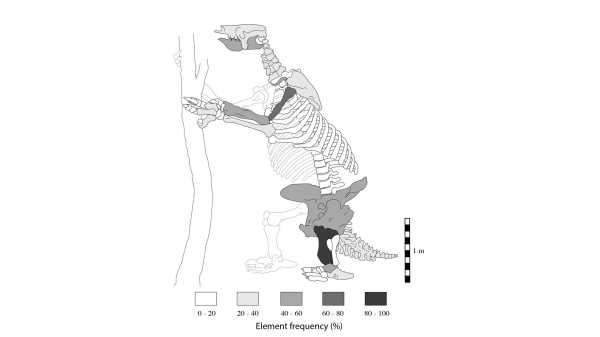 During the Ice Age, a group of giant ground sloths died together after swallowing their own feces in a contaminated pool of shallow water.

Scientists discovered the bones of nearly two dozen ground sloths (Eremotherium laurillardi) in a pit at a fossil-rich site called Tanque Loma in southwestern Ecuador. The bone bed dates to the end of the Pleistocene epoch (around 2.6 million to 11,700 years ago) and holds thousands of bones from large mammals.

The condition of the sloth bones and their arrangement relative to each other hinted that the animals died around the same time, the scientists wrote in a new study. And preserved vegetation helped the researchers piece together a grim picture of a marshy watering hole saturated with sloth poo, that sickened and killed the sloths that gathered there, the researchers reported.

Giant ground sloths once roamed the Americas and are kin to the much smaller tree sloths that are around today. The biggest ground sloth, Megalonyx jeffersonii, reached about 10 feet (3 meters) in height and would have towered above a human. These massive herbivores first appeared in South America about 35 million years ago and died out at the end of the Pleistocene, along with most other big Ice Age mammals, such as mastodons, dire wolves and cave lions.

Some experts argue that humans hunted these mega mammals to extinction, while others say that the animals vanished as the global climate changed. But for the Tanque Loma sloths, death came for different reasons.

Researchers identified 575 bones representing 22 ground sloth adults and juveniles, dating them to around 18,000 to 23,000 years ago. The bones were preserved in a single layer without much sediment separating them, suggesting that the animals died around the same time and were submerged soon afterward, according to the study.

While there was a coating of asphalt atop the bones, it didn’t extend all the way through the fossil layer. This detail told the researchers that the sticky goo seeped into the marsh after the animals were already dead, and that the sloths didn’t die because they became trapped in sticky tar, as was the case in the La Brea tar pits in Los Angeles, for instance. 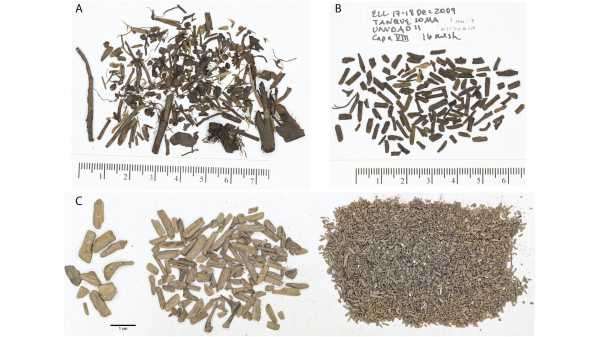 Unlike preserved vegetation from the La Brea deposits (A), many of the plant fragments in the Tanque Loma deposit — (B) and (C) — are uniform in length and have sharp edges, suggesting that they came from sloth coprolites or gut contents.

The scientists also analyzed the soil around the bones and plant matter at the site, identifying the location as a marsh that periodically dried up, allowing ground plants to flourish. The sloth bones were surrounded by plants that appeared to have been chewed and digested.

So, what killed all those sloths? One likely explanation is that they wallowed together in a watering hole as do modern large herbivores, such as wildebeests and hippos, to escape heat and insects. But their relief took a deadly turn; after the animals fouled the marsh with their feces, they would have later eaten contaminated plants and drunk polluted water, leading to their deaths from pathogens lurking in those feces. More recently, hippos have died en masse in marshy locations dirtied by enormous quantities of their poo, the scientists said.

In one case in the 1970s, during the dry season, a herd of hippos in Tanzania filled a shrinking watering hole with their feces; photos of the wallow showed “a small group of live hippos in the water and many hippo corpses on the shore,” and the herd shrank from 140 hippos to around 40 in just one week, the researchers wrote.

Based on the evidence from Ecuador, the giant ground sloths likely met a similar fate.

The findings were published online April 15 in the journal Palaeogeography, Palaeoclimatology, Palaeoecology.