Home Animals Mummified Pup Died in Siberia 18,000 Years Ago … And Might Be... 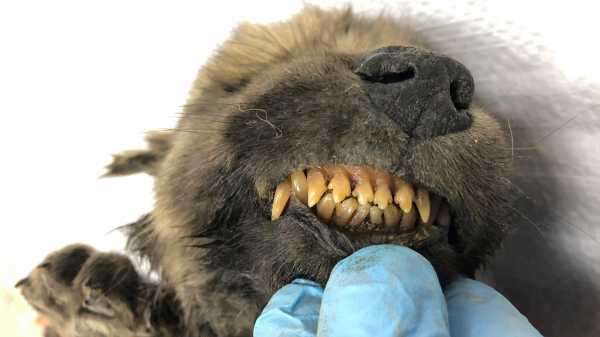 The pup still had its milk teeth, suggesting it was under 2 months old when it died.

A young pup that spent 18,000 years buried in Siberian permafrost looks remarkably lifelike and pettable — for a freeze-dried mummy. From its frozen tomb, the Ice Age canine’s body emerged in near-perfect condition, retaining even the pads and nails on its small feet and plenty of hair, down to its tiny eyelashes and delicate whiskers.

The pup still had its milk teeth, suggesting it was under 2 months old when it died; The body is so well preserved that its resemblance to a wolf is clearly visible, The Siberian Times recently reported.

Dogs are descended from wolves, and their lineage may have split from their lupine ancestors’ as early as 40,000 years ago, according to ancient DNA evidence. Scientists at the University of Stockholm’s Centre for Palaeogenetics conducted genetic tests on the Siberian pup’s remains, but they were unable to determine if the mummy represented a dog or a wolf, the Times reported.

DNA analysis did tell the scientists that the pup was a male. They named it “Dogor” — “friend” in the Yakut language — though in English, the name references the mummy’s uncertain status: dog or … something else, according to the Times. 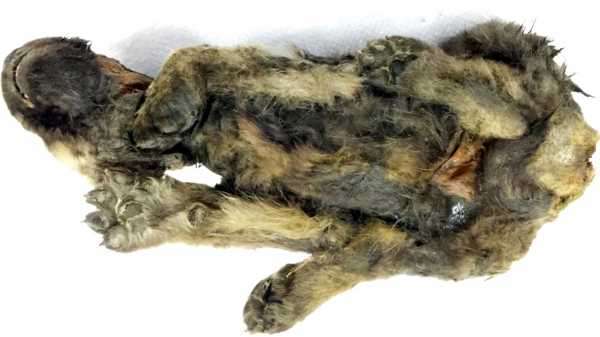 The scientists named the pup “Dogor” — “friend” in the Yakut language.

Researchers discovered the mummified pup during the summer of 2018 near the Indigirka River in Yakutia, in the northeastern part of Russia. The oldest known fossil of a domesticated dog dates to 14,700 years ago, though remains of dog-like canines are known from 35,000 years ago, another research team reported in 2017 in the journal Nature. In the study, the scientists suggested that dogs diverged genetically from their wolf ancestors between 36,900 and 41,500 years ago.

What does this mean for the Siberian pup? A mummified canine dating to 18,000 years ago could be a dog, a wolf or possibly even a transitional form — an animal with traits of both species, the Times reported.

“This is intriguing,” said Sergey Fedorov, a researcher with the North-Eastern Federal University in Yakutsk, Russia, and one of the scientists investigating the puppy. “We can’t wait to get results from further tests,” he told the Times. 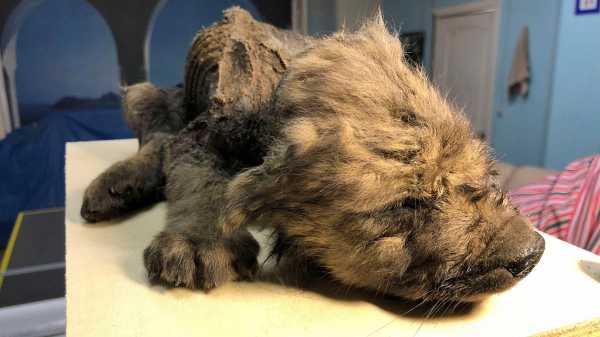 Over the past several years in Siberia, melting permafrost has released some astonishingly well-preserved examples of ancient animals. In 2017, paleontologists unearthed an astonishing mummy of a young horse from a crater in Yakutia; the 2-month-old foal lived 30,000 to 40,000 years ago and its body was whole and undamaged, with its skin and hooves intact. And in 2018, a man searching for mammoth tusks discovered the mummy of a young Ice Age feline. Like the newfound puppy, the wild kitten’s species was hard to pin down, and experts suspect it could be a cave lion or a Eurasian lynx.

Then in June, a man walking by a river in Yakutia in Russia spied the enormous, severed head of an Ice Age wolf, dating to more than 40,000 years ago.

The frozen Siberian wilderness also recently revealed something more gruesome than ancient animal remains: a bag containing 54 severed human hands, buried in snow on a river island and found in 2018. Unlike the Ice Age mummies, the hands were modern in origin and were likely discarded illegally by a nearby forensic lab, according to Russian authorities.

Decapitated, kneeling skeleton found in a pit in China linked to...

‘First species discovered on Twitter’ is a parasitic fungus that dines...