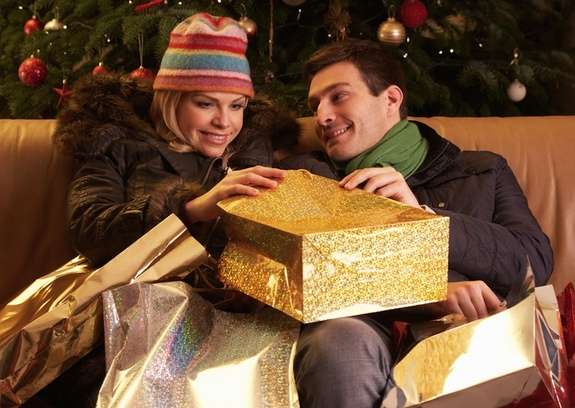 When you rip open presents this Christmas, you’re taking part in traditions, some pagan, that stretch back thousands of years.

When you gather around the Christmas tree or stuff goodies into a stocking, you’re taking part in traditions that stretch back thousands of years — long before Christianity entered the mix.

Pagan, or non-Christian, traditions show up in this beloved winter holiday, a consequence of early church leaders melding Jesus’ nativity celebration with pre-existing midwinter festivals. Since then, Christmas traditions have warped over time, arriving at their current state a little more than a century ago.

,” said Philip Shaw, who researches early Germanic languages and Old English at Leicester University in the U.K. The term is related to the Latin word meaning “field,” Shaw told LiveScience. The lingual link makes sense, he said, because early European Christianity was an urban phenomenon, while paganism persisted longer in rustic areas.

Early Christians wanted to convert pagans, Shaw said, but they were also fascinated by their traditions.

Perhaps that’s why pagan traditions remained even as Christianity took hold. The Christmas tree is a 17th-century German invention, University of Bristol’s Hutton told LiveScience, but it clearly derives from the pagan practice of bringing greenery indoors to decorate in midwinter. The modern Santa Claus is a direct descendent of England’s Father Christmas, who was not originally a gift-giver. However, Father Christmas and his other European variations are modern incarnations of old pagan ideas about spirits who traveled the sky in midwinter, Hutton said.

2. We all want that warm Christmas glow

But why this fixation on partying in midwinter, anyway? According to historians, it’s a natural time for a feast. In an agricultural society, the harvest work is done for the year, and there’s nothing left to be done in the fields.

“It’s a time when you have some time to devote to your religious life,” said Shaw. “But also it’s a period when, frankly, everyone needs cheering up.”

The dark days that culminate with the shortest day of the year ­— the winter solstice — could be lightened with feasts and decorations, Hutton said.

“If you happen to live in a region in which midwinter brings striking darkness and cold and hunger, then the urge to have a celebration at the very heart of it to avoid going mad or falling into deep depression is very, very strong,” he said.

“Even now when solstice means not all that much because you can get rid of the darkness with the flick of an electric light switch, even now, it’s a very powerful season,” he told LIveScience.

3. The Church was slow to embrace Christmas

Despite the spread of Christianity, midwinter festivals did not become Christmas for hundreds of years. The Bible gives no reference to when Jesus was born, which wasn’t a problem for early Christians, Nissenbaum said.

“It never occurred to them that they needed to celebrate his birthday,” he said.

With no Biblical directive to do so and no mention in the Gospels of the correct date, it wasn’t until the fourth century that church leaders in Rome embraced the holiday. At this time, Nissenbaum said, many people had turned to a belief the Church found heretical: That Jesus had never existed as a man, but as a sort of spiritual entity.

“If you want to show that Jesus was a real human being just like every other human being, not just somebody who appeared like a hologram, then what better way to think of him being born in a normal, humble human way than to celebrate his birth?” Nissenbaum said. [Religious Mysteries: 8 Alleged Relics of Jesus]

Midwinter festivals, with their pagan roots, were already widely celebrated, Nissenbaum said. And the date had a pleasing philosophical fit with festivals celebrating the lengthening days after the winter solstice (which fell on Dec. 21 this year). “O, how wonderfully acted Providence that on that day on which that Sun was born … Christ should be born,” one Cyprian text read.

4. The Puritans hated the holiday

But if the Catholic Church gradually came to embrace Christmas, the Protestant Reformation gave the holiday a good knock on the chin. In the 16th century, Christmas became a casualty of this church schism, with reformist-minded Protestants considering it little better than paganism, Nissenbaum said. This likely had something to do with the “raucous, rowdy and sometimes bawdy fashion” in which Christmas was celebrated, he added.

In England under Oliver Cromwell, Christmas and other saints’ days were banned, and in New England it was illegal to celebrate Christmas for about 25 years in the 1600s, Nissenbaum said. Forget people saying, “Happy holidays” instead of “Merry Christmas,” he said.

“If you want to look at a real ‘War on Christmas,’ you’ve got to look at the Puritans,” he said. “They banned it!”

5. Gifts are a new (and surprisingly controversial) tradition

While gift-giving may seem inextricably tied to Christmas, it used to be that people looked forward to opening presents on New Year’s Day.

“They were a blessing for people to make them feel good as the year ends,” Hutton said. It wasn’t until the Victorian era of the 1800s that gift-giving shifted to Christmas. According to the Royal Collection, Queen Victoria’s children got Christmas Eve gifts in 1850, including a sword and armor. In 1841, Victoria gave her husband, Prince Albert, a miniature portrait of her as a 7-year-old; in 1859, she gave him a book of poetry by Alfred, Lord Tennyson.

All of this gift-giving, along with the secular embrace of Christmas, now has some religious groups steamed, Nissenbaum said. The consumerism of Christmas shopping seems, to some, to contradict the religious goal of celebrating Jesus Christ’s birth. In some ways, Nissenbaum said, excessive spending is the modern equivalent of the revelry and drunkenness that made the Puritans frown.

“There’s always been a push and pull, and it’s taken different forms,” he said. “It might have been alcohol then, and now it’s these glittering toys.”