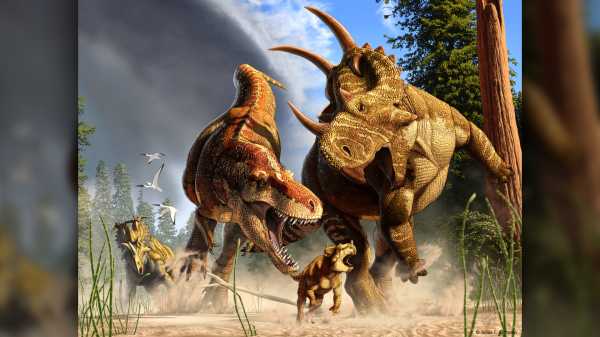 In this artist’s depiction of life 77 million years ago in Alberta, Canada, the tyrannosaur Daspletosaurus hunts a young horned Spinops. An adult Spinops tries to interfere, and a Coronosaurus watches from a distance.

Tyrannosaurus rex may have been the world’s first power-walker, using its lengthy legs to relentlessly pursue fleeing prey, new research has found.

Walking, the scientists discovered, would have been an energy-efficient hunting strategy for big dinosaurs like tyrannosaurs.

To better understand walking and running in T. rex and other theropods, or meat-eating dinosaurs, scientists measured metrics such as relative limb size, posture and body mass in 93 individual dinosaurs from 71 theropod species, in order to calculate how those factors may have affected the animals’ maximum speeds.

They found that while long-leggedness made some theropods fast runners, that wasn’t always the case. In very large dinosaurs, such as T. rex, long limbs came with a different advantage, allowing the predator to keep up a slower but steady pace long after a speedier animal would have grown tired and given up the chase.

“The assumption tends to be that animals with adaptations for running, such as long legs, are adapted for a higher maximum speed, but this paper shows that there’s more to running than top speed,” said study co-author Thomas Holtz, a principal lecturer in the University of Maryland’s Department of Geology.

“When you’re a bigger animal, those adaptations may also be for endurance and efficiency,” Holtz said in a statement. “It may be about being a marathoner rather than a sprinter.”

Theropods were a highly successful group of terrestrial dinosaurs that dominated the Mesozoic era (252 million to around 66 million years ago), and bipedalism — walking on two legs — is thought to have played a big part in their success, the scientists wrote. In the study, they looked at theropods in a range of sizes: from pipsqueaks that weighed less than 11 lbs. (5 kilograms) to T. rex behemoths that weighed more than 20,000 lbs. (9,000 kg). They measured the dinosaurs’ hip height, body length and limb bone length, and estimated the theropods’ energy requirements.

In small and medium-size theropods, having long legs did increase speediness, according to the researchers’ calculations. For a not-so-big dinosaur, being a fast runner would have helped it not only catch prey, but also evade larger predators.

But that speedy advantage declined in bigger, heavier dinosaurs that weighed more than 2,200 lbs. (1,000 kg), even when they had long legs, the scientists discovered. In large theropods, long legs represented greater energy efficiency and reduced energy cost while foraging — roaming around on the lookout for prey, sometimes for hours at a stretch.

“That’s actually a very beneficial savings, because predators tend to spend a great deal of their time foraging,” Holtz said in the statement. “If you are burning less fuel during the foraging part of the day, that’s an energy savings that dinosaurs with shorter leg forms didn’t get.”

Even if T. rex wasn’t a fast runner, it was still capable of turning very quickly to chomp down on escaping prey, pivoting in a deadly pirouette like a “figure skater from hell,” Live Science previously reported.

As a group, tyrannosaurs tended to be both large and long-legged, more so than other theropods, according to the study. But did “legginess” in tyrannosaurs emerge in the group over time, or was it an ancestral trait retained by all tyrannosaurs — even the group’s biggest species, such as T. rex?

For now, it’s difficult to say. Yet both options “present interesting evolutionary scenarios” and hint at broader implications for understanding not only tyrannosaurs but also the ancient ecosystems where these deadly predators ruled the land, the researchers said.

The findings were published online May 13 in the journal PLOS One. 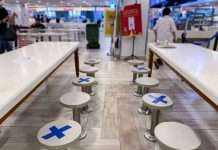