Home Animals This palm-sized elephant relative was just sighted for the first time in... This is the first-ever photo of a live Somali Sengi, a tiny mammal that was recently rediscovered in Africa.

A teensy animal, with a long nose, a fur tuft on its tail and big, spectacled eyes hadn’t been seen in nearly half a century. That is, until a whiff of peanut butter lured the wee mouse-sized mammal out from the rocky, rugged lands of Djibouti in the Horn of Africa.

The recently “rediscovered” mammal, called a Somali sengi (Elephantulus revoilii), is a species of elephant shrew. While elephant shrews are related to elephants, aardvarks and manatees — they’re not elephants and they’re not shrews.

The Somali sengi has not been seen since 1973. Everything known about the obscure mini mammal came from 39 individual specimens that were collected decades and centuries ago and that are now stored in museums, according to a statement from Global Wildlife Conservation.

In 2019, a group of scientists from the U.S. and Djibouti set out to look for the species after receiving tips that the creatures could be hiding in Djibouti, although the animals had only previously been found in Somalia, according to the statement.

“For us living in Djibouti, and by extension the Horn of Africa, we never considered the sengis to be ‘lost,’ but this new research does bring the Somali sengi back into the scientific community, which we value,” co-author Houssein Rayaleh, a research ecologist and conservationist with the nonprofit organization Association Djibouti Nature, said in the statement. Rayaleh had seen the creature before — and locals had too, correctly identifying it in photos during interviews with the scientists, according to the statement. 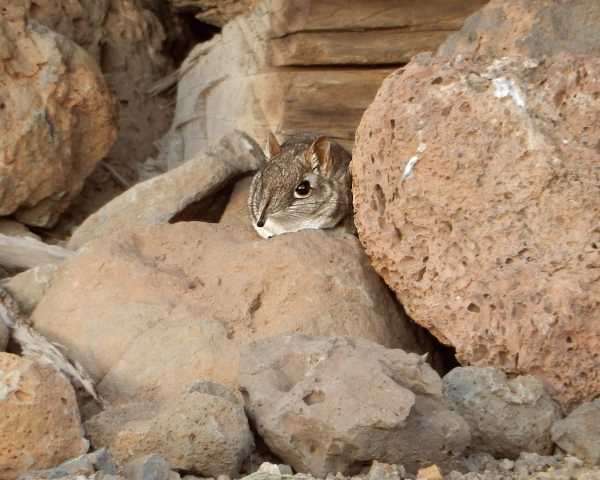 This Somali Sengi was spotted way up north, greatly expanding the range of the species.

Using information from interviews, analysis of dung piles at candidate sites and assessments of terrain and sheltering potential, the researchers set up 1,259 traps at 12 different locations across the rocky terrain. They lured the animals to the traps by setting out peanut butter, oatmeal and yeast. They caught one of the elusive mammals in the first trap they set.

In total, they found 12 Somali sengis, which they could distinguish from a similar species by the tuft of fur on their tails, according to the statement. “For Djibouti, this is an important story that highlights the great biodiversity of the country and the region and shows that there are opportunities for new science and research here,” Rayaleh said.

They found all of sengis by rocky outcrops and relatively sparse vegetation, areas that are typically inhospitable to human activities, meaning the tiny creatures are not likely to experience habitat destruction, according to the statement. Because they found comparable numbers to other sengi taxa and because they now know that the creatures live beyond just Somalia, the authors recommended that the IUCN Red List of Threatened Species change the Somali sengi’s current “data deficient” status to “least concern,” according to the statement.

“Usually when we rediscover lost species, we find just one or two individuals and have to act quickly to try to prevent their imminent extinction,” Robin Moore, one of GWC’s Search for Lost Species program leads, said in the statement. “This is a welcome and wonderful rediscovery during a time of turmoil for our planet, and one that fills us with renewed hope for the remaining small mammal species on our most wanted list.” (GWC crafted a list of 25 of the most wanted “lost” species.)

The findings were published today (Aug. 18) in the journal PeerJ.

In Denmark, they cannot yet destroy the minks infected with mutated...

End of the world: When will the Rapture happen – What...