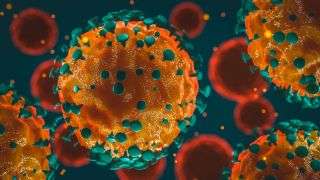 The novel coronavirus has spread for the first time in the U.S. through person-to-person contact, the Centers for Disease Control and Prevention (CDC) announced today (Jan. 30) during a teleconference.

The virus was confirmed in the husband of an Illinois woman who had contracted the infection after traveling to Wuhan. Her husband is the sixth person in the U.S. to be confirmed with the virus; he was recently admitted to the hospital and remains stable.

The patient is in his 60s and has some underlying medical conditions that weren’t specified during the news conference. The woman, who is also in her 60s, is still in the hospital — mainly for isolation — but is doing well, said Dr. Jennifer Layden, the state epidemiologist for Illinois.

The other four U.S. patients confirmed with the virus had also traveled to Wuhan and had returned to their homes in California (two of the four), Arizona and Washington state.

CDC experts had expected that some person-to-person spread would occur in the U.S., Dr. Robert Redfield, the director of the CDC, said during the teleconference. “We understand that this may be concerning,” he said. “But based on what we know now, our assessment remains that the immediate risk to the American public is low.”

Public health officials are monitoring the close contacts of this new Illinois patient, and 21 patients in the state are under investigation for the new coronavirus, said Dr. Ngozi Ezike, the director of the Illinois Department of Public Health. She added that at this time, people in the general public do not need to take additional precautions, such as canceling activities or avoiding going out. “This person-to-person spread was between two very close contacts, a wife and husband,” Ezike said. “The virus is not spreading widely across the community.”

Elsewhere in the world, there has been some limited person-to-person spread of the new virus outside of China. There have been nine cases in which close contacts of travelers to China were infected, Redfield said. “However, the full picture of how easy and how sustainable this virus can spread is unclear.”

In one international case, a 65-year-old man was admitted to a hospital in Vietnam with a low-grade fever and fatigue after having traveled to Wuhan with his wife. He was confirmed to be infected with the new coronavirus, as was his son, who had spent three days in a hotel room with his parents, according to a report of the case that was published Jan. 28 in The New England Journal of Medicine. The man’s wife did not contract the virus, however.

“If you are a traveler who has recently returned from the impacted area, we want you to be vigilant for the symptoms and signs of this novel coronavirus,” which is a fever and a cough, Dr. Nancy Messonnier, director of CDC’s National Center for Immunization and Respiratory Diseases, said during the teleconference. “If you have those symptoms, please call your health care provider.”