Home Health Can people spread coronavirus after they recover? 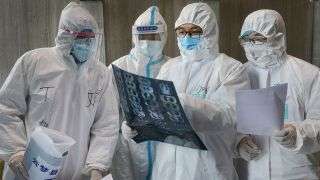 Doctors look at a lung CT image at a hospital in Yunmeng county, Xiaogan city, in China’s central Hubei province in Feb. 20, 2020.

A small study out of China suggests that the new coronavirus can persist in the body for at least two weeks after symptoms of the disease clear up.

This sort of persistence isn’t unheard of among viruses, experts told Live Science, and thankfully, the patients are most likely not very contagious in the post-symptom period. The findings may even be good news, said Krys Johnson, an epidemiologist at Temple University’s College of Public Health. The viruses that tend to hang around in people’s systems also tend to be the viruses that the body develops a strong immune response against.

“If the virus is staying in people’s systems, then they may not be able to be reinfected,” Johnson told Live Science.

The new study, published in the journal JAMA on Thursday (Feb. 27), followed four medical professionals ages 30 to 36 years old who developed COVID-19 (the disease caused by the new coronavirus) and were treated at Wuhan University’s Zhongnan Hospital in China between Jan. 1 and Feb. 15. All of the individuals recovered, and only one was hospitalized during the illness. The patients were treated with oseltamivir, better known under the brand name of Tamiflu, an antiviral drug.

The patients were considered recovered after their symptoms resolved and after they tested negative for COVID-19 twice (on two consecutive days). After recovery, the patients were asked to quarantine themselves at home for five days. They continued to undergo throat swabs for the coronavirus after five days for up to 13 days post-recovery.

The results showed that every test between Day 5 and Day 13 was positive for the virus.

“These findings suggest that at least a proportion of recovered patients still may be virus carriers,” the researchers wrote.

The findings come as Japan reported its first case of an individual who recovered from coronavirus and then became ill with the disease for a second time, according to Reuters. Given the new results on post-coronavirus persistence from China, it’s not clear what happened with the Japanese patient, Johnson said. One possibility is that she caught a new version of the virus from another person; another possibility is that her own system did not fight off the virus completely and as it began to replicate inside her lungs again, she experienced a resurgence of symptoms.

It is not uncommon for viruses to persist at low levels in the body even after someone recovers from an illness, said Ebenezer Tumban, a virologist at Michigan Tech University. For example, Zika virus and Ebola virus are known to stick around for months after patients recover, Johnson noted.

The test that the four patients from Wuhan, China, underwent looks for genetic fragments of the virus in the body, Tumban said. The Tamiflu they were taking could have pushed the number of viral copies in their bodies down to just a few, he said. At that point, the test would not have been sensitive enough to detect the virus.

After the antiviral treatment ended, the viruses may have begun replicating again at a low level, Tumban said. There would not have been enough of the virus to cause tissue damage, so the patients felt no symptoms. But the number of viral copies would have gotten high enough for the test to catch them again.

At that point, the individuals were likely not very contagious, Johnson said. Coughing and sneezing spews viral particles around, but these individuals were not coughing or sneezing. Their viral loads were also low. It would take more intimate contact to spread the virus.

“They should be careful in the household setting not to share drinks and make sure they’re washing their hands frequently,” she said. “But if they’re just a carrier, they shouldn’t be able to transmit outside of that close contact of shared beverage and food.”

None of the study patients’ family members tested positive for coronavirus at the time of the paper’s publication. However, the authors noted that the patients were all medical professionals who took very careful precautions to avoid spreading the disease while at home.

Virus that persists in the body may elicit enough of an immune response to provide some protection against new infection, Johnson said. There are many questions about how long immunity would last, though, Tumban said. For example, the body maintains immunity against the coronaviruses that cause the common cold for only a year or two, he said. And there is always the possibility that the new coronavirus would mutate as it moves through populations, changing into a version that already-exposed immune systems can’t recognize.

“The challenge is, how fast does this mutate?” Johnson said.

More follow-up studies are needed to understand recovery from COVID-19, Johnson said. The individuals in the study from Wuhan were all of similar age and health status, and none experienced severe illness from COVID-19.

Future research should also look at viral loads within the lungs, Tumban said. A throat swab captures the virus only from the upper reaches of the respiratory tract, but the virus makes its home deep in the lungs. Sampling from the lungs is a more invasive procedure, involving washing fluid through the alveoli (small air sacs in the lungs) and testing that fluid for viral particles, Tumban said. Still, the study suggests that long-term monitoring of recovered patients and their contacts is important.

“One week or two weeks after, is the amount of virus in the blood or lungs going to come up to a higher concentration so that the person can transmit it to other people?” Tumban said. “That’s something that we still don’t know.”