Home Health Coronavirus screening expands to 20 US airports; researchers start work on a... 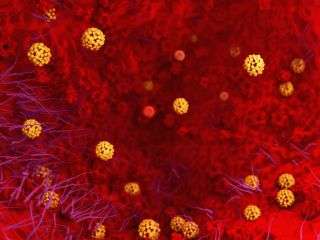 As the total number of confirmed cases in China continues to climb, U.S. health officials aim to prevent an outbreak at home while studying the newfound disease and developing treatments. “At this point, Americans should not worry for their own safety,” HHS Secretary Alex Azar said during a news briefing today. For “the individual American, this should not [have] impact on their day-to-day life.”

The purpose of expanding screenings from five airports to 20 is to identify ill passengers returning from China, and to educate travelers about symptoms of the coronavirus so that individuals can seek medical attention if they suspect they may be infected, added Dr. Nancy Messonnier, Director of the National Center for Immunization and Respiratory Diseases.

Local and state health officials, directed by the Centers for Disease Control and Prevention (CDC), remain on the lookout for travelers with signs of respiratory illness or fever who either traveled to China recently or could have made contact with an infected person. In addition, close contacts of infected individuals are being monitored for signs of developing illness; this precaution will help the CDC to catch additional cases and understand how the disease progresses through time, Messonnier said.

“The coming days and weeks are likely to bring more confirmed cases,” as well as potential reports of human-to-human transmission within the U.S., said CDC Director Dr. Robert Redfield. But as of yet, “there is no spread of this virus in our communities here at home,” he said.

Besides preventing a potential outbreak, CDC officials are developing diagnostic, therapeutic and preventative measures to take down the new virus. Chinese health officials have made the genetic sequence of the virus available online, and using that information, the CDC developed a “rapid” diagnostic test. The agency plans to share the test with domestic and international partners after verifying its accuracy.

As far as treating the viral infection goes, currently, “there is no proven therapy for coronavirus infection,” said Dr. Anthony Fauci, Director of the National Institute of Allergy and Infectious Diseases. In China, a select number of patients are being treated with antiviral drugs, including Remdesivir, which was initially developed as an Ebola treatment, and a drug called Kaletra, made of two separate antiviral medications.

“There’s no proven efficacy of these” against the new coronavirus, Fauci said. “That is why it’s so important that we get isolates of the virus.”

By gathering these isolates, or samples, of the virus from infected people, CDC officials hope to design a therapy that will train patients’ immune cells to detect and destroy the virus, Facui said. Similar treatments, known as monoclonal antibody therapies, were developed for the coronaviruses that cause severe acute respiratory syndrome (SARS) and Middle East respiratory syndrome (MERS), but were only tested in petri dishes and animal models, he said. These in-development treatments also could potentially treat the new virus, but likely wouldn’t target the bug specifically enough to be particularly effective, Fauci said.

The more isolates of the new virus the CDC can procure, the more “robust” and specific its treatment solutions will be, Azar added. The agency hopes to deploy representatives on the ground in China to study isolates from infected people at the epicenter of the outbreak. The Chinese government will allow international experts from the World Health Organization to work on “increasing understanding of the outbreak to guide global response efforts,” according to a statement published Jan. 28. The extent of U.S. involvement has not been clarified yet.

In the meantime, CDC officials are already in the midst of developing a candidate vaccine to innoculate individuals against the new virus. Using the data shared by Chinese health officials, the agency identified a “glycoprotein spike” on the virus’ surface that enables the bug to enter host cells. The spike shall serve as an “immunogen” for the vaccine, meaning that the medicine will recognize the virus by binding to the structure, Fauci said.

Fauci said that he predicts, “with some cautious optimism,” that the CDC could launch aPhase 1 clinical trial of a potential vaccine within the next three months. This initial trial would test the safety  of the vaccine; assuming that the results are positive, the agency would then evaluate the state of the outbreak before proceeding to a larger safety and efficacy trial.

“We are proceeding as if we have to deploy a vaccine … we are looking at the worst scenario, that this becomes a bigger outbreak,” Fauci said.

As compared to their secretive stance during the 2003 SARS epidemic, Chinese health officials have been “cooperative” in meetings with the CDC and other international partners, and forthright with sharing information, Azar noted. Thanks to this transparency, “within one week, the CDC had invented a rapid diagnostic test. Within two weeks, we have a candidate vaccine that we’re working on,” he said.

That said, the virus continues to spread rapidly in China, and until the U.S. can deploy researchers to the scene, health officials can only work with the data they have at home. Continued transparency is needed to answer important questions about 2019-nCoV, including where the virus came from, whether asymptomatic people can transmit the infection, and how many cases have truly occurred so far, Azar said.