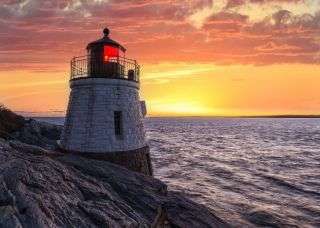 There are currently 8,962 confirmed cases of COVID-19 in Rhode Island and 279 deaths, according to the state’s Department of Health. Community transmission —  meaning the virus is spreading without an identifiable source, such as people returning from travel abroad carrying the disease — has been confirmed in the state.

— On Friday (May 1) Governor Gina Raimondo said the state is on-track to lift its stay-at-home order on May 9, the Providence Journal reported. The first phase of reopening will allow many public parks to reopen. You can find the full list of applicable parks here.

— On Thursday (April 30) governor Raimondo said that public schools will be resuming in-person classes in fall (the state’s entire student population has migrated to “distance learning” for the remainder of the academic year), but students will likely see many changes compared to what they’re used to.

“We will have to be washing our hands a lot more,” the governor said in a briefing. “We might have to make changes to the way we have lunch and breakfast at school.”

Class sizes may shrink, and students and/or teachers may have to wear masks in class, the governor added.

— Rhode Island has the highest per capita COVID-19 testing rate in the country, NPR reported on Wednesday (April 29). The state’s testing rate is more than three times the national average. Governor Gina Raimondo attributed the state’s testing success in part to walk-through testing sites, for which any individual with symptoms can easily book a testing appointment.

The widespread testing is supported in part by a partnership with CVS Health, which has offered drive-through testing at certain locations since the beginning of April.

— Also on Wednesday, governor Raimondo announced that events with hundreds of attendants, including concerts, festivals and parades, will not be allowed in Rhode Island this summer. Weddings with greater than 50 attendants are unlikely to be permitted, the governor added.

— On Monday (April 27) Governor Gina Raimondo said she hopes to lift the statewide stay-at-home order on Saturday, May 9. This would be the first step in a multi-phase process of reopening the state’s economy, Raimondo said.

“Masks, vigilant hand-washing and increased cleaning must remain in place. And everyone who can work from home should still work from home,” the governor added. “All activities must account for strong social distancing guidelines of remaining 6-feet apart.”

Governor Raimondo also released the full text of her reopening plan, which is available to read here.

— In her briefing on Thursday (April 23) governor Raimondo announced that schools will remain closed for the duration of the academic year.

— On Wednesday (April 22) governor Raimondo said that state parks and beaches could reopen as soon as May 8.

— On Tuesday (April 21) governor Raimondo announced that the currently vacant Brown University campus will be opening its residence halls to medical personnel, public safety workers, nursing home employees, and others on the front lines of the COVID-19 crisis who do not wish to return to their homes for fear of spreading the disease to family members. Roughly 700 single-occupancy rooms will be made available for free, the Providence Journal reported.

— On Thursday (April 16) governor Raimondo shared official projections showing that the state could see anywhere from 2,100 to 4,000 coronavirus-related casualties by the end of October, depending on how strictly citizens comply with social distancing restrictions, the Providence Journal reported.

“I think we’re doing very well [so far],” the governor said, adding she is optimistic that the lower projection will be the reality.

The governor also announced a voluntary phone tracking program that would make it easier to trace the contacts of people who test positive for the virus.

— On Thursday (April 9) governor Raimondo announced a new executive order allowing Department of Health officials to fine people caught violating isolation or quarantine orders. The amount of each fine has not been finalized, but will be in the hundreds of dollars, according to the Providence Journal.

— On Tuesday (April 7) governor Raimondo extended all current restrictions on social gatherings until May 8. Gatherings of more than 5 people remain prohibited, as do religious services and indoor dining at restaurants.

Raimondo said she disagreed with Providence Mayor Jorge Elorza’s decision to close all city parks and golf courses, noting the importance of walking outdoors for physical and mental health.

— On Monday (April 6), CVS Health opened a drive-through COVID-19 testing site outside Twin River Casino in Lincoln. The site will be able to process as many as 1,000 tests a day, according to the Providence Journal, effectively doubling the state’s daily testing capacity.

— On Wednesday (April 1) governor Raimondo said that testing in the state will soon ramp up from about 500 tests a day to 1,000 a day, the Providence Journal reported. The governor also announced several new programs, including bridge loans for small businesses and a website to help citizens under quarantine safely get food delivered to their homes.

— On Monday (March 30), governor Raimondo announced that all public schools would continue “distance learning” until at least the end of April. Low-income families will be able to apply for free Wifi access (through May 18) from the state’s four largest Wifi carriers, according to the Providence Journal.

— On Thursday (March 26) governor Raimondo said she’d be signing an executive order mandating any that anyone entering Rhode Island from New York state by any means of ground transportation must provide personal information to authorities and self-quarantine for 14 days.

“I understand this is an extreme measure,” the governor said during a news conference, adding that it was necessary while confirmed New York coronavirus cases continue to “skyrocket.”

— On Monday, governor Raimondo announced via Twitter that the state’s presidential primary would be postponed from April 28 to June 2.

— On Friday (March 20) governor Raimondo activated the Rhode Island National Guard for additional staffing help, according to the Providence Journal. The 1,000 troops may be used to staff call centers, deliver food, or operate drive-by testing centers, among other duties, the governor said.

— On Monday (March 16), governor Raimondo announced several measures to flatten the curve of the disease’s spread, including banning on-premise food consumption at restaurants, bars, coffee shops, and other eateries at least through April 13. Establishments with food licenses can continue to serve customers by pick-up, drive-thru and delivery only, the Department of Health added. All barbershops and salons were ordered to temporarily close beginning on Sunday (March 22).

Gatherings of 25 of more people have also been banned statewide, the governor said. Citizens are advised to only leave home for essential errands, such as grocery shopping, getting gas, and visiting the pharmacy. While public transit remains open, citizens should take care not to board a bus with 25 people on it already, the governor said, and instead wait for the next one.