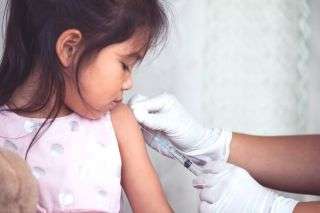 Despite a weird flu season, this year’s flu shot is working relatively well to prevent influenza, particularly among children, according to a new report.

In the new report, researchers from the Centers for Disease Control and Prevention (CDC) estimated the flu shot’s effectiveness in more than 4,000 U.S. children and adults who visited the doctor for respiratory illness between Oct. 23, 2019, and Jan. 25, 2020.

Flu shots are generally 40 to 60% effective when the flu strains circulating match the strains in the vaccine, and this year’s estimates fall within that range, the authors said.

This season’s flu shot is also working better than last season’s shot, which was estimated to be only 29% effective at reducing doctor’s visits for flu.

This season’s shot may be working well because of the types of flu viruses that are circulating. The main flu strains circulating this season are influenza B and H1N1; and flu shots generally provide better protection against these strains than with H3N2, which was the dominant strain at the beginning of the 2018-2019 flu season.

The 2019-2020 flu season has been a strange one — at the beginning of the season, the main strain of flu circulating was influenza B, which typically does not cause as many cases as influenza A strains (H1N1 and H3N2) and tends to show up later in the season. But in late January and February, officials saw a surge in activity of H1N1. This type of “double-barreled” flu season, in which one strain of flu hits on the heels of another, is also unusual, Live Science previously reported.

So far this season, there have been an estimated 26 million illnesses, 250,000 hospitalizations and 14,000 deaths from flu in the U.S., according to the CDC.

If you missed your flu shot earlier in the season, it may not be too late to get one — although it’s optimal to get your flu shot in early fall, before flu activity picks up, the CDC continues to recommend flu shots while flu viruses are circulating. And this flu season looks like it may drag on longer than usual — flu activity has already been elevated for 21 weeks, which is longer than the average length of about 18 weeks, according to the new report.