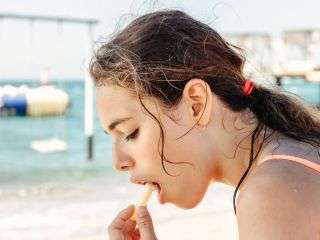 Is it OK to snack before swimming?

In 1908, “Scouting for Boys,” the Boy Scout’s guidebook, admonished young readers who dared eat less than 90 minutes before swimming: “You may drown — and it will be your own fault.”

That old adage has since kept countless children on the pool deck, watching forlornly as their friends splash around. But according to science, swimmers have nothing to worry about.

There are grains of truth in each of these rationale, Wernicki told Live Science. Inadequate blood supply can cause muscle cramps. And it turns out that when we eat, the body does divert extra blood to our stomach; when we exercise, our muscles also get extra blood. But the change in blood supply after chowing down on a sandwich isn’t severe enough to result in a medical emergency, Wernicki said.

In other words, muscle cramping due to low blood supply just doesn’t happen in healthy people, according to the Mayo Clinic. Instead, it usually indicates an underlying medical condition, such as arteriosclerosis, a condition that occurs when a person’s artery walls narrow and harden.

There was a time when scientists took this myth seriously. In the 1960s, multiple studies investigated whether eating before swimming impacted the performance of athletes or resulted in any kind of nausea. One small study, however, found it was bupkis. In 1968, scientists fed 24 swimmers a hearty breakfast of cereal, toast, sugar, butter and whole milk, then had them wait for varying periods of time before swimming laps.  None of the athletes experienced any cramping or nausea whatsoever; they didn’t even slow down, according to the study, published in the journal Research Quarterly for Exercise and Sport.

Today, there’s a clear consensus that eating before swimming isn’t remotely dangerous. In 2011, the American Red Cross published a scientific review on the question and found that food restrictions before swimming are unnecessary and unfounded in scientific evidence.

There has never been a recorded instance of a person drowning because they just ate, according to Wernicki.

That said, drowning is still a danger in the United States. From 2005 to 2014, an average of 3,536 people drowned each year in the U.S, which equates to about 10 deaths a day, according to the Centers for Disease Control and Prevention. People tend to drown when they hold their breath for too long underwater, breathe too deeply before a dive or get tired. You don’t need to worry about when you eat, but do exercise caution, Wernicki said.

“Make sure you know how to swim, make sure you’re aware of your surroundings,” he said.