Two people trapped in a stuck lift drowned as floodwaters rose up around them in Israel’s coastal city of Tel Aviv, amid rain and thunderstorms sweeping the country

The efforts to save the pair trapped in the submerged lift were in vain (Image: Israel Fire and Rescue Department)

A man and woman have drowned after they became trapped in a lift that was stuck in rising floodwaters.

Authorities in Israel say the pair died in the lift as it filled with rising rainwater in the coastal city of Tel Aviv, as the country was battered by stormy weather .

Rescue crews had to use scuba gear in an attempt to rescue the pair from the submerged lift, but they were pronounced dead in hospital, according to local reports.

The lift had been hit by an electrical short-circuit in the flooded basement of a residential building in the city this afternoon, reports the Jerusalem Post . 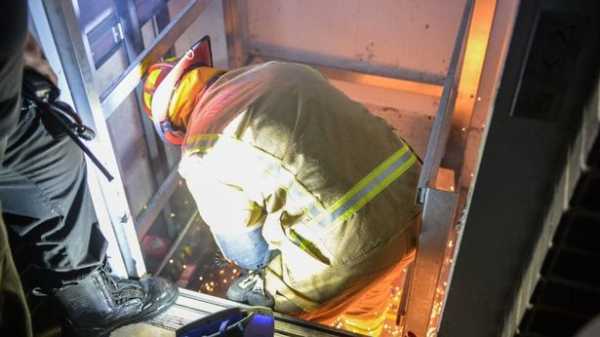 Crews managed to save the pair while they were still alive but both died in hospital
(Image: Israel Fire and Rescue Department)

Emergency services managed initially to rescue the man, who was aged in his 30s, about 3pm local-time but he died in hospital a short time later.

Two hours later rescuers reached the woman, who was unconscious and in a critical condition, but they were unable to save her.

Haaretz reports the woman who drowned was also believed to have been aged in her 30s.

“One of the [two] in his 30s was rescued and brought to us, unconscious, without a pulse and not breathing whilst suffering from hypothermia,” Magen David Adom medic Yosef Nahon told the Post.

“We gave him medical treatment and gave him life-saving treatment while he was being evacuated to Sheba Medical Center in Tel Aviv in critical condition.”

Coronavirus conspiracy: How Pentagon was accused of releasing world-ending infection