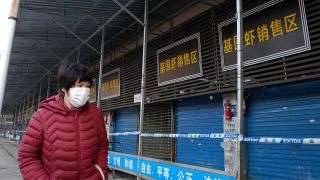 A woman walks in front of a closed seafood market in Wuhan, China. Officials believe the market is linked with an outbreak of pneumonia caused by a new virus.

The new virus in China that’s causing an outbreak of pneumonia may be able to spread between people under certain circumstances, although the risk of such transmission appears to be low, according to news reports.

So far, the virus — a new type of coronavirus — has sickened at least 41 people in the Chinese city of Wuhan, and has been linked to one death, according to the World Health Organization (WHO).

Investigation into how the virus is spread is ongoing, but “from the information that we have it is possible that there is limited human-to-human transmission, potentially among families,” Maria Van Kerkhove, acting head of the WHO’s emerging diseases unit, said in a news briefing, according to Reuters. “But it is very clear right now that we have no sustained human-to-human transmission.”

Many of those infected had either worked at or frequently visited a seafood market in Wuhan. But there is evidence that one woman may have caught the virus from her husband, according to CBS News. In that case, the woman’s husband was a worker at the market and got sick with the virus. Some days later, the woman fell ill as well, even though she did not visit the market. This suggests that the husband may have passed the virus to her, Chinese officials said.

Still, it’s important to note that hundreds of people, including health care workers, have been in close contact with infected patients without contracting the virus, CBS News reported.

The new virus, known for now as 2019-nCoV, was first identified on Jan. 7, about a week after officials first reported a cluster of pneumonia cases in Wuhan, WHO said.

Recently, officials reported the first “exported” case of the virus in Thailand. In that case, a resident of Wuhan got on a direct flight to Thailand along with several members of her family and a tour group, according to WHO. When the 61-year-old woman arrived at the airport, she was found to have a fever, and she was taken to the hospital where she tested positive for 2019-nCoV. The woman is now recovering, and officials continue to investigate the case.

19 Galaxies Apparently Missing Dark Matter. No One Knows Why