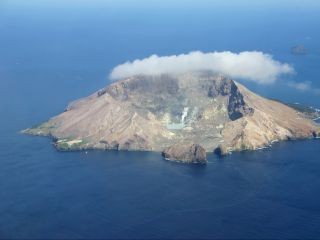 Doctors in New Zealand will have to import 1,292 square feet (120 square meters) of skin to treat victims of the recent White Island volcanic eruption, according to news reports.

The volcano erupted without warning on Monday (Dec. 9) in a sudden steam-driven reaction that sent ash billowing 12,000 feet (3,700 meters) into the air. White Island, which lies about 30 miles (48 kilometers) off the east coast of New Zealand’s North Island, attracts tourists from around the world; 47 people were on the island during Monday’s eruption.Six have been confirmed dead and 29 have been hospitalized in intensive care and burn units, according to CNN. Twenty-five of the victims remain in critical condition.

“We currently have [skin] supply, but are urgently sourcing additional supplies to meet the demand for dressing and temporary skin grafts,” Peter Watson, chief medical officer of the Counties Manukau District Health Board, said in a statement Dec. 11.

Twenty-seven hospitalized patients have burns over about 30% of their bodies, and these extensive injuries were worsened by exposure to poisonous gas, chemicals and boiling hot steam near the volcano, CNN reported. “This has necessitated more rapid surgical treatment of these burns than is the usual case for thermal-only burns,” Watson said.

To meet the patients’ needs, doctors will require 1,292 square feet of skin, the majority of which has been ordered from the United States, he said.

Skin and tissue banks in Australia will also provide skin grafts and supplies for the White Island victims. One Australian patient is being transported home for further treatment, and other Australian patients will likely follow in order to be treated near their “family and support networks,” depending on their medical status, Watson said.

Skin can serve as a “natural plaster” to help curb infections and reduce scarring and pain after intense burns, according to BBC News. Skin can be donated after death and preserved for several years, and normally, burn units maintain an adequate supply to meet their regular demand. But the White Island eruption has pushed intensive care and burn units at four New Zealand hospitals to their limit and they will soon exhaust their in-house skin supply.

Skin grafts typically last a few weeks, during which time the body should begin to repair itself. Often, however,  additional grafts are needed, according to the BBC.

“This is just the start of a very long process that for some patients will last several months,” Watson said.

For some patients, the healing process could last a lifetime.

“We define the treatment of burns not as a 100-meter race but rather a marathon run many times,” Jorge Leon-Villapalos, a cosmetic plastic surgeon and burn specialist at Chelsea and Westminster Hospital in London, told the BBC. “Patients with serious burns are patients for life.”