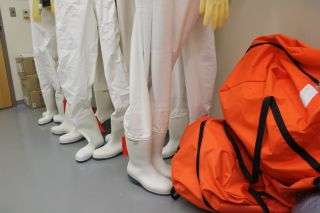 As an escalating viral outbreak unfolds in China, only one lab in the country meets the required biosafety standards needed to study the new disease.

The lab happens to sit in the center of Wuhan, the city where the newly identified coronavirus first appeared, according to the Hindustan Times, an Indian news outlet. The facility, known as the Wuhan National Biosafety Laboratory, is housed within the Chinese Academy of Sciences and was specifically designed to help Chinese scientists “prepare for and respond to future infectious disease outbreaks,” according to a 2019 report published by the U.S. Centers for Disease Control and Prevention (CDC).

The Chinese government moved to construct such a lab following the 2003 SARS (severe acute respiratory syndrome) epidemic, during which more than 8,000 people caught the infection and more than 750 died worldwide, according to the CDC. Laboratories that handle pathogens receive a rating of 1 to 4, depending on what class of microbe they can feasibly contain, with 1 representing the lowest risk and 4 representing the highest risk. Designated at Biosafety Level 4 (BSL-4), the Wuhan lab can hold the world’s most dangerous pathogens at maximum biocontainment levels.

All researchers in a BSL-4 lab must change their clothing upon entering the facility, shower upon exiting and decontaminate all of the materials used during experimentation, according to the CDC. Lab members wear full-body, pressurized suits to isolate themselves from the surrounding environment. The lab itself must be held in a separate building or an isolated wing within the surrounding university and must be supplied with its own air filtration and decontamination systems.

BSL-4 labs are built to contain infectious agents such as the Ebola, Nipah and Crimean-Congo hemorrhagic fever viruses, all of which are highly transmissible and frequently fatal diseases.

Although China intends to build five to seven high-containment laboratories by 2025, as of now, only the Wuhan lab can currently contain pathogens of this nature, according to the 2019 CDC report.

Chinese health officials have classified the new coronavirus as a Class B infectious disease, placing the illness in the same category as SARS and HIV/AIDS, The Washington Post reported. However, the Chinese government announced that it will institute Class A controls — which are usually reserved for more dangerous diseases, like cholera and the plague — in an attempt to contain the outbreak.

Reports of the first infection of this coronavirus in a U.S. citizen, a man in Washington state, have already prompted Chinese health authorities to place Wuhan under quasi-quarantine, meaning that movement to and from the region is now under tight control. Authorities may forcibly quarantine individuals known or suspected to be infected with the virus and will inform the public of each new case identified in China, according to The Washington Post.

More than 400 people have contracted the new coronavirus in China so far, along with others in Thailand, Japan, Taiwan, South Korea and the U.S. China’s supply of surgical masks is running low, and many travelers have canceled their plans for the upcoming Lunar New Year because of fears of becoming infected, the South China Morning Post reported. Only time will tell how and when the outbreak will be quelled and whether the outbreak presents any substantial threat to global health.

Wuhan tested millions of people for COVID-19 in just days. Could...