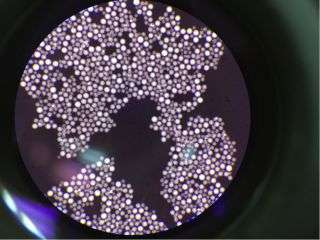 Evolution and natural selection take place at the level of DNA, as genes mutate and genetic traits either stick around or are lost over time. But now, scientists think evolution may take place on a whole other scale — passed down not through genes, but through molecules stuck to their surfaces.

These molecules, known as methyl groups, alter the structure of DNA and can turn genes on and off. The alterations are known as “epigenetic modifications,” meaning they appear “above” or “on top of” the genome. Many organisms, including humans, have DNA dotted with methyl groups, but creatures like fruit flies and roundworms lost the required genes to do so over evolutionary time.

Another organism, the yeast Cryptococcus neoformans, also lost key genes for methylation sometime during the Cretaceous period, about 50 to 150 million years ago. But remarkably, in its current form, the fungus still has methyl groups on its genome. Now, scientists theorize that C. neoformans was able to hang on to epigenetic edits for tens of millions of years, thanks to a newfound mode of evolution, according to a study published Jan. 16 in the journal Cell.

The researchers behind the study didn’t expect to uncover a well-kept secret of evolution, senior author Dr. Hiten Madhani, a professor of biochemistry and biophysics at the University of California, San Francisco, and principal investigator at the Chan Zuckerberg Biohub, told Live Science.

The group typically studies C. neoformans to better understand how the yeast causes fungal meningitis in humans. The fungus tends to infect people with weak immune systems and causes about 20% of all HIV/AIDS-related deaths, according to a statement from UCSF. Madhani and his colleagues spend their days digging through the genetic code of C. neoformans, searching for critical genes that help the yeast invade human cells. But the team was surprised when reports emerged suggesting that the genetic material comes adorned with methyl groups.

“When we learned [C. neoformans] had DNA methylation … I thought, we have to look at this, not knowing at all what we’d find,” Madhani said.

In vertebrates and plants, cells add methyl groups to DNA with the help of two enzymes. The first, called “de novo methyltransferase,” sticks methyl groups onto unadorned genes. The enzyme peppers each half of the helix-shaped DNA strand with the same pattern of methyl groups, creating a symmetric design. During cell division, the double helix unfurls and builds two new DNA strands from the matching halves. At this point, an enzyme called “maintenance methyltransferase” swoops in to copy all the methyl groups from the original strand onto the newly built half.

Madhani and his colleagues looked at existing evolutionary trees to trace the history of C. neoformans through time, and found that, during the Cretaceous period, the yeast’s ancestor had both enzymes required for DNA methylation. But somewhere along the line, C. neoformans lost the gene needed to make de novo methyltransferase. Without the enzyme, the organism could no longer add new methyl groups to its DNA — it could only copy down existing methyl groups using its maintenance enzyme.

In theory, even working alone, the maintenance enzyme could keep DNA covered in methyl groups indefinitely — if it could produce a perfect copy every single time.

In reality, the enzyme makes mistakes and loses track of methyl groups each time the cell divides, the team found. When raised in a petri dish, C. neoformans cells occasionally gained new methyl groups by random chance, similar to how random mutations arise in DNA. However, the cells lost methyl groups about 20 times faster than they could gain new ones.

Within about 7,500 generations, every last methyl group would disappear, leaving the maintenance enzyme nothing to copy, the team estimated. Given the speed at which C. neoformans multiplies, the yeast should have lost all its methyl groups within about 130 years. Instead, it retained the epigenetic edits for tens of millions of years.

“Because the rate of loss is higher than the rate of gain, the system would slowly lose methylation over time if there wasn’t a mechanism to keep it there,” Madhani said. That mechanism is natural selection, he said. In other words, even though C. neoformans was gaining new methyl groups much more slowly than it was losing them, methylation dramatically increased the organism’s “fitness,” which meant it could outcompete individuals with less methylation. “Fit” individuals prevailed over those with fewer methyl groups, and thus, methylation levels remained higher over millions of years. But what evolutionary advantage could these methyl groups offer C. neoformans? Well, they might protect the yeast’s genome from potentially lethal damage, Madhani said.

Transposons, also known as “jumping genes,” hop around the genome at whim and often insert themselves in very inconvenient places. For instance, a transposon could leap into the center of a gene required for cell survival; that cell might malfunction or die. Luckily, methyl groups can grab onto transposons and lock them in place. It may be that C. neoformans maintains a certain level of DNA methylation to keep transposons in check, Madhani said.

“No individual [methylation] site is particularly important, but overall density of methylation on transposons is selected for” over evolutionary timescales, he added. “The same thing is probably true in our genomes.”

Many mysteries still surround DNA methylation in C. neoformans. Besides copying methyl groups between DNA strands, maintenance methyltransferase seems to be important when it comes to how the yeast causes infections in humans, according to a 2008 study by Madhani. Without the enzyme intact, the organism cannot hack into cells as effectively. “We have no idea why it’s required for efficient infection,” Madhani said.

The enzyme also requires large amounts of chemical energy to function and only copies methyl groups onto the blank half of replicated DNA strands. In comparison, the equivalent enzyme in other organisms does not require extra energy to function and sometimes interacts with naked DNA, devoid of any methyl groups, according to a report posted on the preprint server bioRxiv. Further research will reveal exactly how methylation works in C. neoformans, and whether this newfound form of evolution appears in other organisms.

Men who took erectile-dysfunction drug had blue-tinted vision for days.