Home Health Teen impaled by needlefish after it jumped into boat and pierced through... 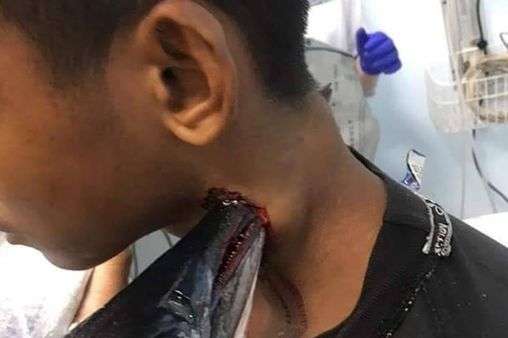 WARNING: GRAPHIC IMAGES Muhammad Idul was on a boat in the waters off Wakinamboro village in the South Buton regency, southern Indonesia, when a fish suddenly leaped at him and speared his neck

The needlefish speared the teen through the neck (Image: CEN/@PositivityMY)

A teenager was impaled by a flying needlefish while out on his boat.

Muhammad Idul was fishing in the waters off Wakinamboro village in the South Buton regency in southern Indonesia when the surprising animal incident unfolded.

Needlefish started leaping out of the water as the 16-year-old was fishing off the side of the boat.

Suddenly one of the animals embedded its long, sharp jaws in Ibdul’s neck and knocked him off his boat.

Despite the sudden attack he was able to swim to the surface before walking home with the fish’s needle-like jaws in his neck, local media reported. 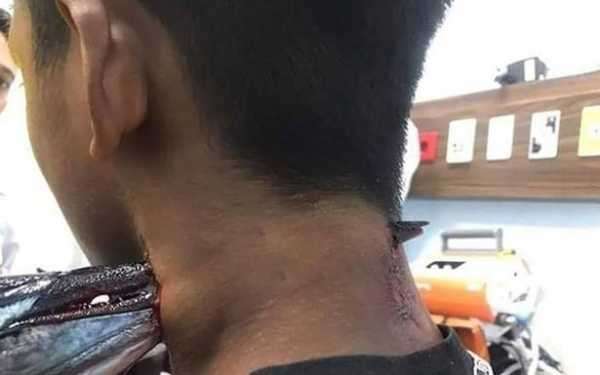 He was then taken to a nearby hospital in the city of Baubau.

However, staff there did not want to remove the fish from his neck because the operation needed specialist equipment.

The teenager was transferred to another hospital in the city of Makassar where doctors performed a delicate one-hour operation to remove the fish from his neck.

Images show the fish’s head after it was pulled out of the teenager’s body.

Idul is said to be in a stable condition as he recovers in hospital and remains under observation to prevent any potential infections. 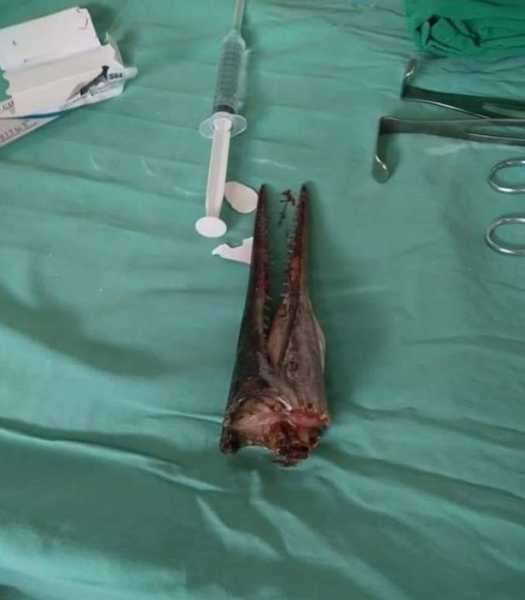 The fish's head was removed by surgeons
(Image: CEN/@PositivityMY)

Anaesthetist Syafri K Arif said he would remain in the hospital for three to four days.

Needlefish are known for their distinctive long, narrow jaws filled with sharp teeth.

They are capable of making short jumps out of the water at up to 37 mph.

There have been at least two people killed in needlefish incidents.

A ten-year-old boy in Hawaii died while on a night time fishing trip with his dad in 1977 when it pierced his eye.

A 22-year-old Thai navy cadet, Kriangsak Pengpanich, was killed in 2018 when he was speared during a training exercise.

Moon’s mysterious disappearance 900 years ago finally gets an explanation