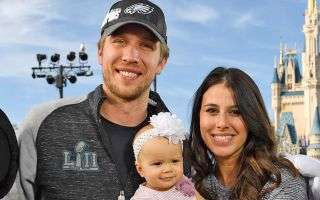 When Tori Foles, wife of Philadelphia Eagles quarterback Nick Foles, started having symptoms of dizziness, nausea and fatigue, one doctor told her she might have anxiety or depression. Another doctor thought she might have a viral infection. But it turned out that she had a mysterious condition that affects blood flow, called “postural orthostatic tachycardia syndrome,” or POTS.

“They told me I had a virus,” Tori Foles told CNN. “But I had never heard of [a viral illness] where you are dizzy all the time. There were a lot of times I couldn’t get out of bed,” said Foles, who recently spoke at a meeting of Dysautonomia International, a nonprofit organization that focuses on POTS research and education. [10 Celebrities with Chronic Illnesses]

POTS is a disorder of the autonomic nervous system, the part of the nervous system that controls involuntary functions, such as heart rate, blood pressure and digestion.

The main feature of POTS is so-called orthostatic intolerance, or symptoms that occur when a person moves from lying down to standing up, according to the National Institutes of Health’s Genetic and Rare Diseases Information Center (GARD). In people with POTS, too little blood returns to their heart when they move from lying down to standing up, GARD says. In addition, their heart rate increases by more than 30 beats per minute within 10 minutes of standing, according to Dysautonomia International.

These circulatory problems lead to symptoms that can include lightheadedness, dizziness or fainting; heart palpitations; headaches; blurred vision; gastrointestinal symptoms, including nausea, bloating, constipation and diarrhea; shortness of breath; and tiredness.

An estimated 1 million to 3 million Americans have POTS, which most frequently affects women under age 35, according to GARD. But the condition can be difficult to diagnose; one study found that POTS patients see about seven doctors over four years, on average, before receiving a POTS diagnoses, CNN reported.

Many POTS patients are initially misdiagnosed with a mental health condition prior to their POTS diagnosis. One study in the United Kingdom found that nearly 50 percent of POTS patients had previously been told they had a psychiatric disorder that was responsible for their symptoms. This may be partly because many people with POTS are young and healthy before their symptoms appear and because 80 percent of people with POTS are women, who are generally more likely to develop depression, according to CNN.

Indeed, Foles, who was diagnosed in 2013 at age 23, wrote on her blog that she was frustrated when several doctors initially suspected her symptoms were due to anxiety or depression.

“I will never forget when [one doctor] looked at me in his office and said, ‘You are young and healthy. You are in perfect condition. Have you looked into depression or anxiety?’ I was so confused and so frustrated,” Foles wrote. “There is nothing worse then [sic] someone telling you that you are perfectly healthy when you feel like your body is breaking down. Doctors need to be more educated on this illness and they need to look for it when a patient comes in complaining of these symptoms.”

The cause of POTS is not known, but a person’s symptoms may be triggered by certain events, such as a pregnancy, major surgery, trauma or viral illness, according to GARD.

There’s no single treatment for POTS, but some people see improvement in their symptoms with lifestyle changes aimed at increasing blood pressure and blood volume. These lifestyle changes include adding extra salt to the diet, drinking more fluids and avoiding things that may make symptoms worse (such as alcohol and caffeine), GARD said. Certain medications may be prescribed, such as fludrocortisone (a steroid) or midodrine (a medication aimed at treating low blood pressure).