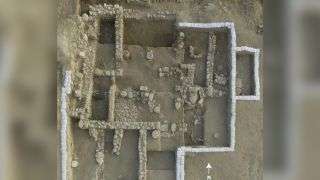 The temple at Lachish is the first ancient Canaanite temple found in more than 50 years and is extraordinarily well preserved, say archaeologists.

A 3,000-year-old temple, built by the Canaanites around the time of the ancient Israelite invasion, has been unearthed in southern Israel.

The discoveries include an idol of the Canaanite god Baal that was the object of prayer and sacrifice in the temple’s inner sanctuary.

The archaeologists were looking for evidence of an Iron Age occupation of the site when they came upon the remains of the temple in the ancient city of Lachish, which is now part of Tel Lachish National Park, about 25 miles (40 kilometers) southwest of Jerusalem.The excavations were expected to reach a fifth level of the buried city that was built in the 10th century B.C., Garfinkel told Live Science — over time, the cities were built on top of the remains of older ones, leaving layers of ruins.

The archaeologists found evidence of the Bronze Age temple on the second day of the project, when they began digging just under the topsoil, he said.

“There was probably severe erosion in the specific place where we started [digging], and the five upper levels had been completely removed,” Garfinkel said. “It was completely unexpected.”

They found two silver-plated bronze figurines of the Canaanite gods Baal and Resheph a few days later. Both are shown “smiting” their enemies, with one arm held high.

“The statues were found in the holy of holies of the temple,” he said, referring to the temple’s innermost sanctuary. “People were praying to them and bringing them tributes.”

Lachish was the second-most-important city in the region after Jerusalem, and it is noted several times in historical sources.

The Book of Joshua in the Hebrew Bible describes how the Canaanite city fell to the invading Israelites in about the 13th century B.C.: “And the Lord delivered Lachish into the hand of Israel, which took it on the second day, and smote it with the edge of the sword, and all the souls therein.”

Garfinkel said Lachish was also sacked by the neo-Babylonians in the early sixth century B.C., by the Assyrians under Sennacherib in 701 B.C. and at least three other times, the earliest of which was in 1550 B.C. — about 400 years before the newly-excavated temple. “Our temple was destroyed at about 1150 B.C., in the middle of the 12th century B.C.,” he said.

Whereas the earlier and later temples were robbed of most of their artifacts, the walls and ceiling of the 12th century temple collapsed quickly and sealed in many objects, he said.

Some of the artifacts the archaeologists found include pottery; bronze cauldrons; decorated blades of daggers and axes; arrowheads; ornate jewelry, such as earrings; and glass and gold beads, Garfinkel said.

The temple roughly corresponds to a time when Canaan — an area that covered most of modern Israel, Jordan, southern Syria, and Lebanon — was ruled by Egypt, and letters to the pharaoh from the subject ruler of Lachish are found in the Amarna tablets, which date to the 13th century B.C.

“There was a lot of cultural influence from Egypt in Canaan,” Garfinkel said. “We discovered Egyptian scarabs [oval ornaments shaped like a scarab beetle] and an amulet in silver showing an Egyptian goddess holding a lotus flower in her hand.”

Letter from the past

The temple at Lachish is laid out like other Canaanite temples found in the nearby ancient towns of Hazor, Megiddo and Shechem, with a central space for unhewn “standing stones” that may have represented gods.

The discoveries include part of a Canaanite inscription on a piece of pottery. That inscription shows the first known use of the letter “samekh,” which also appears in the Hebrew alphabet as a version of the English “s” sound.

Canaanite inscriptions are very rare. Only a few have been found in the past 30 or 40 years, Garfinkel said. “We had A, and B, and C, and D … but there was one letter that was never found before — the Canaanite or Hebrew ‘samekh’,” he said. “In this temple, we found a fragment of an inscription, and on it appears the earliest known letter samekh in the world.”

The discovery is especially important because the ancient Canaanites are now thought to have invented the first alphabet.

The research was reported in January in the journal Levant.

NASA news: ‘What the heck is that?’ How scientists spotted ominous...