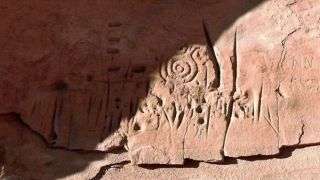 The spiral patterns that appear prominently in the rock carvings are thought to be a symbol among ancestral Pueblo peoples for the sky or the sun.

The Pueblo people created rock carvings in the Mesa Verde region of the Southwest United States about 800 years ago to mark the position of the sun on the longest and shortest days of the year, archaeologists now say.

Panels of ancient rock art, called petroglyphs, on canyon walls in the region show complex interactions of sunlight and shadows.These interactions can be seen in the days around the winter and summer solstices, when the sun reaches its southernmost and northernmost points, respectively, and, to a lesser extent, around the equinoxes — the “equal nights”— in spring and fall, the researchers said.

The carvings show scenes depicting the traditions of contemporary Hopi people — descendants of the ancestral Puebloans who lived in parts of the Southwest until the 13th century. The traditions describe important rituals at seasonal points in the yearly solar calendar tied to farming activities, such as planting and harvesting.

The rock carvings “probably marked the specific seasons,” archaeologist Radek Palonkaof Jagiellonian University in Kraków, Poland, told Live Science. “It was not only to observe the phenomena.”

Since 2011, Palonka has led researchers from his university in investigations of ancient sites around Castle Rock Pueblo that date from the early 13th century. Their research is one of only a few European archaeological projects in the region.

Castle Rock Pueblo is now part of the Canyons of the Ancients National Monument, near Colorado’s border with Utah and about 20 miles (32 kilometers) west of Mesa Verde National Park.

Ethnographic studies in the 19th century suggested that rock carvings in the area may have been used as solar calendars, but Palonka’s team is the first to verify and document the phenomena.

“We used a lot of new technologies, like laser scanning and photogrammetry,” a method that uses detailed photographs to create a map or 3D model of a place or object, he said. “So we were able to see more stuff on the rocks than it is possible to see only with the naked eye.”

At one of the sites studied so far, the petroglyphs are carved on a flat, south-racing rock wall that’s shaded by an overhanging rock. They consist of three carved spirals and smaller elements, including rectangles, grooves and hollows.

At the time of sunset on days near the midwinter solstice, which happens around Dec. 22 each year, patterns of sunlight and shadow can be seen to move through the spirals, grooves and other parts of the petroglyphs, Palonka said.

The phenomenon is also visible around the spring and fall equinoxes, around March 20 and Sept. 22 each year, but it does not occur at other times of the year.

Similar petroglyphs at another ancestral Puebloan site, at nearby Sand Canyon, are lit by sunlight only in the late mornings and early afternoons around the summer solstice, he said.

The observations were made by archaeologists and students from Poland, mostly during the warmer months, and throughout the year by volunteers for the administration of the Canyons of the Ancients National Monument. The team has also discovered several panels of Pueblo rock art previously unknown to scientists, Palonka said.

The name Pueblo — which means “village” in Spanish — was given by Spanish colonists to several Native American peoples who lived in the American Southwest.

Unlike many nomadic Native Americans, the Pueblo peoples lived in large complexes of buildings they constructed from adobe and stone.

In the Mesa Verde region and elsewhere, the ancient villages of ancestral Puebloans are represented by sophisticated “cliff dwellings” in the sides of canyons and under rock overhangs. But the buildings are also found on valley floors, such as at Chaco Canyon in New Mexico.

Many ancient monuments throughout the world show signs of having been used, at least in part, to mark annual events of the solar calendar, such as the midwinter and midsummer solstices.

The importance of solar solstices is also found in several Native American traditions. “This collaboration with native people, in this case Hopi people from Arizona, is really important.” Palonka said.

Among other details, Palonka has learned that the spiral symbol, seen in many of the rock carvings related to the solstices and equinoxes, was often an emblem of the sun or sky — but not always.

‘Miracle’ as skier, 26, survives five hours buried under avalanche in...