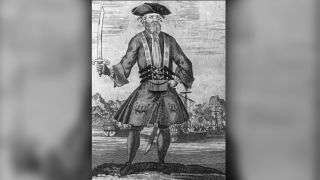 Artist Benjamin Cole created this engraving of Blackbeard for the book “A General History of the Pyrates” by Captain Charles Johnson, published in 1724.

Blackbeard was one of the most-feared pirates in the Americas, robbing Royal Navy and merchant ships off the eastern coast of North America and the Caribbean in the early 18th century. But Blackbeard’s reign of maritime terror ended not long after he ran his ship aground near the Outer Banks of North Carolina. Now, evidence from the shipwreck suggests that the grounding was no accident.

The Queen Anne’s Revenge (QAR) was Blackbeard’s flagship vessel, the pride of his pirate fleet. Historic records describe the ship stranding in 1718 during a hasty getaway, after Blackbeard had just collected a substantial ransom for lifting his blockade of the port in Charles Town, South Carolina. The ship was abandoned when it stuck on a sandbar; it eventually sank below the water’s surface.

Historians have long wondered if Blackbeard merely misjudged the depth of the sandbar and beached the QAR by mistake. However, recent analysis of the ship’s hull revealed that the ship was in poor condition when it ran aground, and it was likely already leaking beyond repair when the notorious buccaneer made the decision to ground and abandon it.

Blackbeard was born as Edward Thatch (or Teach) in 1660; he embarked on a life of piracy in 1717 and was killed in 1718 in an ambush set by officers of the Royal Navy, according to the National Parks Service (NPS).

“In battle, Blackbeard was a savage opponent with a reputation for inhuman strength,” NPS says. “He cultivated his image to strike fear into the hearts of other sailors, wrapping slow-burning lighted coils in his long, black hair and beard.”

The QAR was an important part of Blackbeard’s intimidating persona. Some accounts describe the ship as carrying 22 cannons, while others say up to  40 cannons were onboard, according to the Queen Anne’s Revenge Project, a research endeavor by historians, archaeologists and conservators to preserve and recover the sunken pirate ship.

Since the shipwreck was discovered in 1996 (and officially identified as the QAR in 2011), archaeologists have found lead artifacts at the site. They long suspected sailors used lead to patch the boat’s hull, but the fragments had not been formally studied, said Jeremy Borrelli, a staff archaeologist for the Program in Maritime Studies at East Carolina University, in North Carolina.

Borrelli recently analyzed these lead objects for the first time, publishing his results June 30 in The International Journal of Nautical Archaeology. His results hinted at how damaged the ship was when Blackbeard abandoned it.

Ocean travel was not kind to wooden ships such as the QAR. Bacterial film, barnacle accumulation and wood-eating parasites weakened hull structures and could lead to significant damage, Borrelli wrote in the study. Since 1524, shipbuilders had used lead sheathing to protect wooden hulls, and Borrelli compared the lead pieces found at the shipwreck to similar objects from other archaeological sites, most of which represent ships that sank during the 16th and 17th centuries.

He identified several types of lead sheathing that had been used on the QAR. Among these were numerous elongated strips that secured caulking material, typically braided cow hair soaked in tar or pitch, to seams on a ship’s outer planks — one of the most common sources of leaks, he wrote in the study.

“Using lead strips was a common practice by sailors at the time to provide added protection to vulnerable or leak-prone areas of the hull,” Borrelli told Live Science in an email.

Before Blackbeard captured the QAR in 1717, it was a slaving ship called the Concorde, and records mention several instances in which the ship was badly damaged and required extensive repairs. As a pirate ship under Blackbeard, the vessel accumulated even more damage that required repairs, according to the study.

“Armed with the material evidence that suggested deliberate action to address leaks, additional historical research provided the contextual information that informed us of several instances where the ship might have developed those leaks,” he said.

“While the puzzle isn’t complete — and may never be — we can interpret that the ship might have been in a bad condition when it was lost.”

Historical accounts also suggest that Blackbeard may have had another motive for beaching the failing boat: keeping a bigger portion of the blockade ransom for himself. Shortly after the pirates abandoned the QAR (as well as another of Blackbeard’s ships, Adventure, which had run aground while trying to assist the stranded pirates), Blackbeard commandeered a 12-gun sloop, marooned part of the QAR crew on shore and sailed north, Borrelli said.

– In photos: Pirate ship discovered in the UK

“In their testimony, the pirate crew noted that Blackbeard had not split the ransom with the entire crew,” Borelli said. This led some of the pirates to grumble that Blackbeard intentionally grounded the QAR and planned to leave part of its crew behind, so he could divide the booty among fewer people and take a larger share for himself.

The shipwreck likely holds many more intriguing secrets about the vessel and its outlaw captain and crew. To date, only about 60% of the site has been excavated, and plenty of unexplored artifacts remain scattered on the nearby sea bottom, Borrelli said in the email.

“Recently, conservators found paper wadding with typed text inside a loaded cannon on the site,” Borrelli said. “They were even able to identify the book it came from! For a nearshore site like this, that level of preservation is incredible, and it is a testament to the amazing work by the conservation staff at the QAR Lab,” he said.