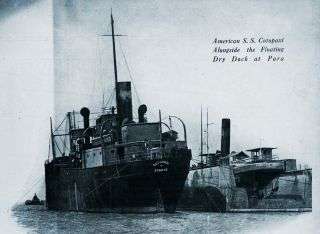 The SS Cotopaxi, before its disappearance in December 1925.

The identification of a nearly 100-year-old shipwreck has debunked a popular conspiracy theory: that the Bermuda Triangle was somehow involved with the 1925 disappearance of the SS Cotopaxi. The  steam powered bulk carrier never made it to its destination in Havana.

The real cherry on top of the discovery, however, is that the SS Cotopaxi shipwreck isn’t even in the Bermuda Triangle, which stretches from Bermuda to Florida to Puerto Rico.

“That’s the thing about this Bermuda Triangle — if you actually look at it on a map, most of the stories associated with it aren’t even in the boundaries,” Michael Barnette, a marine biologist and diver who identified the wreck, told Live Science. “It’s total rubbish.”

The Bermuda Triangle myth didn’t even exist when the Cotopaxi went missing. Not until the 1960s was the term coined, in a magazine article, and in 1974, the bestselling book “The Bermuda Triangle” (Doubleday) came out, proposing, among other things, that the triangle was created when the “lost” city of Atlantis was destroyed.

Since then, the Bermuda Triangle has become common lore, just like Bigfoot and the Loch Ness monster. In 1977, director Steven Spielberg’s movie “Close Encounters of a Third Kind” tied the disappearance of the SS Cotopaxi to the Bermuda Triangle and extraterrestrial activity.

Barnette’s detective work has put the kibosh on that idea. When Barnette moved to Florida from the mid-Atlantic almost 20 years ago, he sought out shipwrecks he could explore while diving. One wreck in particular, known to locals as “the Bear Wreck” and located about 35 nautical miles (65 kilometers) off the eastern coast of St. Augustine, in northern Florida, caught his attention.

Unlike most shipwrecks in that area, the Bear Wreck was large. Intrigued, Barnette did some research; he took measurements of the shipwreck, looked at historical newspaper articles and insurance records, and examined artifacts found at the wreck.

His investigation showed that “the Cotopaxi was really the only option,” Barnette said. “It’s the one that just kind of screamed out.”

In 2015, a rumor began circulating that a ghost ship found by the Cuban coast guard was actually the SS Cotopaxi. Barnette decided to set the record straight, so he posted a video online saying that the real Cotopaxi was at the bottom of the Atlantic. Soon after he posted that, Science Channel contacted him, and the two worked together to make a show about his find.

That show, the first in a series called “Shipwreck Secrets,” aired Feb. 9. You can see it here.

The SS Cotopaxi left Charleston, South Carolina, on Nov. 29, 1925, with a cargo of coal, but the vessel didn’t make it far. A storm wiped out the ship, and none of the 32 people onboard were ever seen or heard from again.

Research done by Barnette and British historian Guy Walters shows why. After the Cotopaxi went missing, the crewmembers’ families sued the company that owned the ship. The families had found the ship’s carpenter, who testified that the ship had broken hatch covers, which were used to cover the coal. If water sloshed aboard the ship and ran down to the cargo hold, the broken covers meant that the ship could flood and sink.

“We know from testimony that the hatch covers were in a very sad state of repair,” Barnette said. “They were in the process of repairing all of these cargo hold covers, yet they were told to sail to Cuba before they completed all of that.”

The research also revealed that the Cotopaxi had sent wireless distress signals on Dec. 1, 1925. These were picked up in Jacksonville, Florida, which isn’t too far from where the wreck is today, according to a statement issued by Science Channel.

Moreover, another diver had discovered brass valves from the wreck with the letters SV on them. Barnette concluded that this probably stood for Scott Valve Manufacturing Co., whose Michigan headquarters are not too far from where the Cotopaxi was built.

“It made sense that a local shipbuilder is going to use local suppliers of hardware and things of that nature,” Barnette said. “That’s more supporting evidence that the Cotopaxi is the Bear Wreck.”

Woman fighting for life after cooking oil injected into buttocks in...