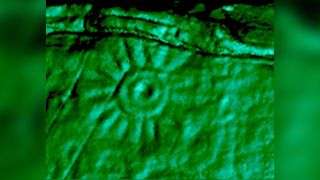 Here, a close-up of one of the engravings (in green contrast) in Peru that was scanned reveals a circular design with a hole in the center and lines radiating outward.

A sprawling, stone monument decorated with swirls, circular patterns and godly fangs has been hiding in a remote jungle in northern Peru for around 2,000 years.

Though the locals knew of the monolith’s existence — and a few explorers who visited the region had noted the structure — it wasn’t until recently that researchers were able to investigate it in-depth. And now, they’ve created a highly detailed 3D scan of the stunning structure.

The images and patterns are so abstract and ornate, they are hard to describe in words. However, the researchers said the two fangs engraved into the stone come from a deity that archaeologists call a “feline feathered figure.”

Getting to the monolith was tricky, due to its location.

Setting off from the town of Leymebamba, “we hiked, ran, rode horses through jungles from 6,000 feet [1,800 meters] up to 13,000 feet [4,000 m] to this really remote village where literally nobody goes,” said Jason Kleinhenz, an application engineer at Exact Metrology, who scanned the monolith. (The team brought school supplies to the village, something that is hard for local people to acquire given the remote location. Members of the team have engaged in humanitarian work in the area for years.)

The team wanted to create a detailed record using an Artec 3D scanner, particularly because the monolith’s carvings are in danger of being lost due to erosion from all the rain pelting the structure’s surfaces. “We don’t know if it’s going to survive,” said Daniel Fernandez-Davila, an archaeologist who had been traveling to the area for 21 years to deliver supplies.

Fernandez-Davila was concerned that when the team reached the monolith they would find its carvings completely eroded away. “It was like going to a vacation on an island, with everything booked, but maybe the island won’t be there,” he said.

Instead, when the team arrived, they found that the engravings on the monolith were still visible. The 3D scanner was able to capture details that are hard to make out with the naked eye, such as the fangs from the “feline feathered figure.”

The engraving of the “feline feathered figure” indicates that the carvings were created during what archaeologists call the “formative period,” which occurred between 200 B.C. and A.D. 200.

There was no writing in Peru during this period, but studies of other archaeological sites in Peru show that the feline feathered figure was popular at the time.

“It’s iconic … only people of that period can carve it the way that it is” shown on the monolith, said Fernandez-Davila, noting that the other carvings on the monolith may be associated with the deity.

As such, the jungle valley where the monolith is located is “probably a very important and sacred place,” Fernandez-Davila said. The monolith is made of a sedimentary rock that is not found locally and so would have been dragged into the jungle valley from elsewhere, he said. The weight of the monolith (about a ton) and its size (2.5 feet tall by 10 feet wide by 5 feet long, or 8.0 by 3 by 1.5 m) would have made dragging the rock through the jungle a difficult task requiring many people.

“That itself was a tremendous effort, a communal effort definitely,” Fernandez-Davila said.

The Inca, who flourished in the area during the 15th century A.D., also believed that the jungle valley was a sacred place, as they built two baths not far from where the monolith is located.

With the team’s work showing that the Artec 3D scanner can produce an accurate model of the monolith, and of other small artifacts that were scanned, Fernandez-Davila said he plans to conduct an archaeological expedition in the area in the future. Having a reliable method of recording complex ancient art and artifacts and the fact that the 3D scanner works makes an expedition easier to conduct.