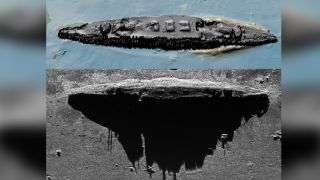 Researchers used two kinds of sonar to detect the wreck of the World War I German battlecruiser Scharnhorst.

The wreck of one of the most famous German warships of World War I has been located on the seafloor near the Falkland Islands, where it sank in a battle with British warships more than 100 years ago.

The battlecruiser Scharnhorst sank on Dec. 8, 1914, with more than 800 crewmembers on board, including German Adm. Maximilian Graf von Spee.

The Scharnhorst had tried to lead a naval attack on the Falklands, but the German squadron was surprised by a larger force of British warships. During the resulting Battle of the Falkland Islands, the British sank the Scharnhorst along with eight other German warships.

Using an autonomous underwater vehicle (AUV) operated from the survey ship Seabed Constructor, researchers discovered the wreck yesterday (Dec. 4) about a mile (1.6 kilometers) beneath the surface of the Atlantic Ocean.

After it was revealed by the AUV’s sonar, the researchers sent down a remotely-operated vehicle (ROV) to take video of the wreck.

“The moment of discovery was extraordinary,” marine archaeologist Mensun Bound, the expedition leader, said in a statement. “We are often chasing shadows on the seabed, but when the Scharnhorst first appeared in the data flow, there was no doubt that this was one of the German fleet.”

“We sent down an ROV  to explore, and almost straight away, we were into a debris field that said ‘battle,'” he said. “Suddenly, she just came out of the gloom with great guns poking in every direction.”

Searchers started looking for the wreck of the Scharnhorst and other warships from the German squadron in the centenary of the Battle of the Falkland Islands in December 2014, but they were unsuccessful.

The wreck was found unexpectedly, when the AUV left its search path to turn around and scan another line of the seafloor — passing over the Scharnhorst during the turnBound said. The scientists realized they’d “found” the wreck only several hours later, when the AUV returned to the surface and the data from the search was downloaded and converted into a legible format, Bound said.

The wreck — which lies on the seafloor about 100 nautical miles southeast of Port Stanley, the capital of the Falkland Islands — has not been touched or disturbed in any way, and the site will now be legally protected, said Donald Lamont, chairman of the Falklands Maritime Heritage Trust.

The defeat of the Scharnhorst and its warship squadron was a decisive naval battle in the early stages of World War I, according to the Falklands Maritime Heritage Trust.

The Battle of the Falkland Islands came just a few weeks after the Battle of Coronel, off the coast of Chile, when Graf von Spee’s East Asia Squadron sank two Royal Navy armored cruisers. More than 1,600 British servicemen were killed in the battle, but only three Germans were wounded.

In response, Britain sent a squadron led by two advanced battlecruisers, HMS Invincible and HMS Inflexible, to the South Atlantic to hunt for Spee and his warships. A month after their defeat at Coronel, the British warships engaged the largest German warships — the Scharnhorst, Gneisenau, Nürnberg and Leipzig.

The Scharnhorst was the first to sink, after suffering heavy damage from the guns of the Invincible and the Inflexible.

More than 2,200 German sailors died during the battle, including Graf von Spee and his two sons — Heinrich aboard the Gneisenau and Otto aboard the Nürnberg.

The defeat of the East Asia Squadron spelled the end of Germany’s hopes to dominate the sea during World War I, and the Imperial German High Seas Fleet was effectively bottled up in the North Sea by the Royal Navy for the rest of the war, according to the British Library.

Bound was born in the Falklands, so the discovery of the Scharnhorst has a special meaning. “As a Falkland Islander and a marine archaeologist, a discovery of this significance is an unforgettable, poignant moment in my life,” he said.

The search team will now look for the rest of the German fleet sunk in 1914, to better understand the events of the battle and to ensure the site’s protection, Bound said.

Coronavirus prophecy: Why are Christians saying biblical pestilence has arrived?