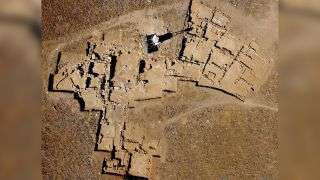 A storehouse of ancient treasures, including precious jewels and gold beads, has been uncovered by archaeologists on an island near Crete devoted to making a precious purple dye from sea snails thousands of years ago.

The finds on Chrysi — a now uninhabited island — show the high value placed on the rare purple dye and the flourishing economy of the settlement between 3,800 and 3,500 years ago, during the Protopalatial and Neopalatial periods of the Minoan civilization on Crete.

Archaeologists think the largest building in the settlement was inhabited by a local elite who may have governed the Minoan settlement on the tiny island, south of the east end of Crete, Greece’s culture ministry said in a statement.

The team found deep beds of thousands of the shells of spiny sea snails called Murex — which make the vivid purple substance within their bodies — in several small buildings in the settlement but not in the large building.

Instead, the large building was equipped with terraces, work desks, stoves, buckets and a stone staircase, suggesting that it was once inhabited by those who managed the settlement’s production of the purple dye, and perhaps its promotion and trade to buyers who visited the island by ship, as well as payments wherein precious metals, jewelry and gemstones.

The prosperity of the island settlement was not shown by the remains of its simple buildings, but by the high quality of the artifacts found there, the statement said.

Archaeologists have investigated the settlement on Chrysi since 2008, revealing various discoveries, including the remains of large carved stone tanks near the waterline on the beach.

Based on their earlier work, the scientists suspect that the tanks were used to farm the shellfish — a species of Murex called — to increase their numbers and reduce the labor of harvesting them from the sea.

The tanks were also supplied with extra seawater from a cistern, the regional director of antiquities and leader of the excavations, Chryssa Sofianou, told Live Science. “We think the shellfish were cultivated.”

The most recent excavations have centered on the largest of the several ancient buildings in the settlement, where the archaeologists found ancient artifacts, including wa ring, a bracelet and 26 beads made from gold. They also discovered beads made from silver, bronze and glass; and semiprecious gemstones, including amethyst and lapis lazuli.

The researchers also found a seal made from agate, adorned with a carving of a ship; three large vases made of copper; and ingots of bronze and tin — one of the largest caches of raw metal ever found in Crete.

Sofianou said it was not possible yet to say just how many people lived at the settlement, but that was one of the questions that archaeologists sought to answer. Although the purple-making settlement on Chrysi is old, it’s not quite the earliest found on Crete. Archaeologists think the Minoans may have been the first to make the famous dye about 4,000 years ago.

Ruscillo has studied the production of the ancient purple dye, including experimenting with it to make colors from pink to blue to almost black, though she isn’t involved in the excavations on Chrysi.

“Purple did not exist from any other source at the time,” she told Live Science. “Cheaper plant substitutes, such as madder or woad, did not come around until the Middle Ages, so until that time Murex purple was the only source.”

The shellfish make a small amount of the purple substance inside their bodies, and use it as a poisonous defense against predators.

It takes thousands of Murex sea snails to produce enough purple dye to color a single garment, a difficult and sometimes dangerous task. “There was danger and discomfort involved in harvesting the snails from the sea, strength required to break open the shells, [and] the smell was horrendous,” she said.

The difficulty of making the dye led to it only being used by the wealthy and royal, and it became known as “Royal purple.”

It was also known as “Tyrian purple,” after the ancient Phoenican coastal city of Tyre, a source of the dye; and it’s thought to be the dye described in Hebrew scriptures as the color of the curtains of the tabernacle and the vestments of the high priest, Ruscillo said.

Later in history, the use of the rare and expensive color purple was restricted by Roman sumptuary laws, which penalized ostentatious clothing and jewelry.

Eventually, the color purple became a signifier of the Roman emperor: The ascension of a new emperor became known as “donning the purple,” and children of the Imperial family were said to be “born into the purple.”