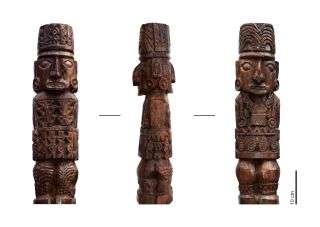 The Pachacamac idol, long thought to be destroyed by the Spanish conquistadors in 1533, was discovered in 1938.

A basketball-player-size wooden idol that allegedly escaped destruction by the Spanish conquistadors is real — but it may not be quite what people suspected. The statue is even older than thought, and may have been worshipped by the people who came before the Inca.

And belying the grisly lore that surrounds it, the so-called Pachacamac idol was painted with cinnabar, not drenched in blood, the researchers found.

Together, these findings helped verify the idol’s authenticity. In other words, “We have a new argument to demonstrate that this wooden statue is the original Pachacamac idol,” and not another Incan artifact or even a forgery, study lead researcher Marcela Sepúlveda, a research associate at Sorbonne Université in Paris, told Live Science.

The Western world became aware of the Pachacamac idol when conquistador Hernando Pizarro  ordered his followers to destroy it in 1533, asking them to “undo the vault where the idol was and break him in front of everyone,” according to historical sources, the researchers wrote in the study.

The Inca revered the idol, which was thought to possess the powers of an oracle. The Inca housed it in what is now known as the Painted Temple, located in the Pachacamac archaeological complex near Lima, Peru. In the 15th and 16th centuries, Pachacamac was an Inca sanctuary and a pilgrimage destination.

However, it now appears that the idol survived the conquistadors. In 1938, an archaeologist found the 7.6-foot-long (2.34 meters) idol, which has a diameter of 5.1 inches (13 centimeters), at the Painted Temple. However, no one knew whether this carved wooden artifact was the idol, or something else.

To investigate, Sepúlveda and her colleagues did a carbon-14 analysis and found that the idol dated to about A.D. 760 to 876. This dates to the Middle Horizon (A.D. 500 to 1000), the time of the Wari people, about 700 years before the height of the Incan empire. This date suggests that the Wari culture made the idol and that the Pachacamac site was important even before the Inca took over, the researchers said.

In addition, the researchers wondered if the idol had been painted, like other artifacts from antiquity such as Greek temples and statues. One rumor from the conquistadors suggested that the idol was red, possibly from the blood of sacrifices.

With the permission of the Pachacamac Site Museum, the researchers took the idol out of its showcase at the museum and analyzed it for several hours with two kinds of X-ray fluorescence spectrometry, a non-destructive technique that identifies specific elements in a composition.

“We were excited to observe that traces of colors were preserved,” Sepúlveda said. The idol’s teeth had once been painted white while parts of its headdress had yellow pigment, they found. The researchers also identified red, not from blood but from cinnabar, a mercury mineral. This mineral occurs naturally high in the Andes about 250 miles (400 km) from Pachacamac.

Given that cinnabar isn’t found locally, it’s likely that the idol was painted red intentionally, possibly to show the culture’s economic might and political power, Sepúlveda said.

The cinnabar finding provides “new evidence on potential long distance exchange of minerals for painting ritual objects of great importance,” Patrick Ryan Williams, a curator, professor and head of anthropology at The Field Museum in Chicago, who specializes in pre-Columbian Peru cultures, told Live Science in an email.

However, “further analyses could help clarify the sources of these materials, but this is an excellent starting point for understanding the origins of this important idol, which was worshipped for hundreds of years before the Spanish Conquest at one of Peru’s most important early oracle sites,” said Williams, who wasn’t involved in the study.

The study was published online today (Jan. 15) in the journal PLOS ONE.