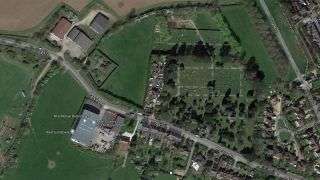 A satellite view of Aylesbury-Vale district in Buckinghamshire, England shows the site where the skeletons were found, at a farm near a graveyard (top center).

Excavation for the construction of a retirement community in the rural U.K. recently unearthed 42 skeletons in shallow graves that had their hands tied behind their backs.

But how the bodies ended up there and who they might represent remain unknown.

Contract archaeologists working with the builders have yet to provide local officials with a report about the remains, and county residents are calling for answers, local news site The Milton Keynes (MK) Citizen reported on Jan. 28.

The remains were discovered in December on West End Farm in Buckingham, England, after developer Brio Retirement Living Holding broke ground for 72 new apartments for retirees, according to MK Citizen. The shallowness of the graves and the fact that the skeletons’ hands were bound suggested “they were prisoners of some kind,” said District and Town Councillor Robin Stuchbury.

“They could date from Anglo-Saxon times, when there were killings in Buckingham, or from during the Civil War, which also saw casualties,” Stuchbury told MK Citizen. “Or they could be criminals who were hanged on the gallows in the town.”

Representatives of Bucks County Council’s Archaeological Service (BCAS) said that they were aware of the find but had yet to receive further information about the discovery of the skeletons, MK Citizen reported.

“We are unable to comment on the archaeological remains discovered at the West End Farm site at present, as we are still awaiting a report detailing the results from the archaeological contractors,” a spokesperson told MK Citizen.

Analysis of the excavation would include descriptions of any artifacts found in the graves, as well as the skeletons’ genders, ages and details of how they died. All of this would help determine who the people were and how they ended up buried together in these farmland mass graves — but it could be months before BCAS receives such a report, according to the BBC.

This find is of great historical significance to Buckingham, and it should not be hushed up,” Stuchbury added.