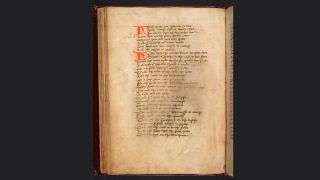 This 15th-century courtesy book, entitled “The Lytille Childrenes Lytil Boke,” taught kids table manners and other rules, such as “don’t pick your nose.”

A 15th-century book on manners, newly digitized by The British Library, is filled with rules that wouldn’t be out of place in a first-grade classroom today: Don’t spit at the table, don’t burp, and for goodness sake, .

Well, make that “pyke notte thyne errys northyr thy nostrellys” (pick not thine ears nor thy nostrils), as the book is written in Middle English. The manuscript is called “The Lytille Childrenes Lytil Boke,” the two spellings of “little” harking back to a time before English spelling was standardized. Originally published in 1480, during the transition from the Middle Ages to the Renaissance in Europe, the book was part of a genre known as “courtesy books,” according to The British Library.

Courtesy books were full of advice on table manners and other rules, and they were popular between the 13th and 18th centuries in Europe, according to the library. This particular copy was part of a larger manuscript that focused mostly on domestic concerns, from carving meat to bloodletting methods. It may have once belonged to or been used by a child named Maria, as that name is doodled on one of the pages.

The rules in the book are often familiar to any parent trying to civilize a small child, though some are very much of their time. Children are exhorted not to pick their teeth with a knife (“Pyke not thi tothe with thy knyff”) or to spit over the table (“Spette not ovyr thy tabylle”). They are told to wait for their social betters to take their drinks before drinking themselves (“And yf thy lorde drynke at that tyde, / Dry[n]ke thou not, but hym abyde”).

Other rules urge forbearance at the dinner table. Children should not be too eager to stuff the cheese course in their mouths, the book warns: “And chesse cum by fore the, be not to redy.” Burping is strictly a no-go, according to the warning not to burp as if a bean were in one’s throat (“Bulle not as a bene were in thi throote”). Children were also urged to suppress their natural energy with a warning that laughing, grinning and speaking too much would be a sin (“Loke thou laughe not, nor grenne / And with moche speche thou mayste do synne”).

“By listing all the many things that medieval children should not do, it also gives us a hint of the mischief they got up to,” The British Library description of the manuscript notes.

No word, though, on how scintillating medieval children found these books of rules. According to a British Library feature on children’s books, manners books transitioned away from dry lists toward cautionary tales in the 1700s. Instead of do’s and don’ts, kids of later eras got to read about the trials of bad children like Jacky Jingle and Sulky Sue, who eventually repent of their mischievous ways, grow up, marry and run a farm together.