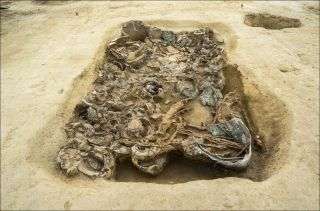 The rich assemblage of grave goods indicates that the person buried here held a high status.

Archaeologists have found the remains of an entire iron-wheeled war chariot in a newly discovered Iron Age tomb in central Italy, a new study finds.

The lavish tomb is also brimming with other riches, including a stash of weapons, a bronze helmet and vessels made of bronze and clay.

The body of the chariot’s owner, however, is long gone.

At the time of burial, the person — likely a man, based on the war-related grave goods — was likely buried under a large mound of dirt that rose above the ground like a giant gumdrop. If his body was placed near the surface, “it would have had little chance of surviving the centuries of subsequent ploughing that have removed all traces of any above ground mound,” study researcher Federica Boschi, a senior assistant professor of methods of archaeological research at the University of Bologna in Italy, wrote in the study.

But even though the body is missing, the treasures in this 2,600-year-old grave reveal much about this mystery man, Boschi said. The “extraordinary collection of cultural material” is “unequivocal testimony to the aristocratic status of the tomb’s owner,” Boschi told Live Science in an email.

The burial goods are so swanky, she began referring to the site as the “princely tomb,” Boschi said.

Archaeologists found the burial while surveying the land prior to the construction of a new sports complex in the Nevola River Valley. An aerial survey over the town of Corinaldo revealed evidence of the grave.

This bird’s-eye view showed the remains of large, circular ditches. This seemed peculiar, so Boschi and her colleagues began doing groundwork. At first, they used electrical resistance, which puts electrical currents into the ground and monitors for anomalies in how current flows through the soil. The team also used magnetic surveys to detect if any metal artifacts were lurking underground.

These surveys hinted that something was buried under the ditches. Soon after the archaeologists began digging, they found the tomb and its treasures, Boschi said.

She noted that the grave is surrounded by a 98-foot-wide (30 meters) circular moat, which may have had that gumdrop-like mound over it at the time of the burial. The tomb itself is smaller, measuring 10.5 by 9 feet (3.2 by 2.8 m).

The tomb dates to the seventh century B.C., so it likely belonged to the Piceni culture, a group of Iron Age people who lived along the Adriatic coast of Italy. Evidence, including the artifacts from this burial, indicate that the Piceni were warlike, according to Encyclopedia Britannica. In 268 B.C., Rome annexed their land.

It’s a “rare event” to find such an opulent grave from the Iron Age, Boschi said. Its grave goods, size and the fact that it was once likely covered with an earthen mound “speak to us about a Piceni leader, a person which gathered political, military and economic power,” she said.

Going forward, archaeologists plan to study the hundreds of objects within the burial. The study was published online today (Jan. 23) in the journal Antiquity.