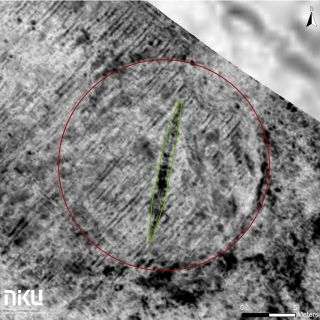 The remains of a Viking ship that was 52 to 56 feet (16 to 17 meters) long were found near a medieval church at Edøy, on the island of Smøla in Norway.

The remains of a Viking ship have been discovered on a farm near a medieval church at Edøy, on the island of Smøla, in Norway.

The ship, which is 52 to 56 feet (16 to 17 meters) long, appears to be part of a burial mound, suggesting that it was used to bury someone important, said its discoverers, archaeologists Manuel Gabler and Dag-Øyvind Engtrø Solem, both with the Norwegian Institute for Cultural Heritage Research (NIKU).

They don’t know if there is a skeleton or multiple skeletons inside the boat.

The archaeologists used high-resolution georadar mounted on a cart to make the discovery. In fact, it was almost by chance they spotted the ship’s outline.

“We had actually finished the agreed-upon area, but we had time to spare and decided to do a quick survey over another field. It turned out to be a good decision,” Manuel Gabler, an archaeologist with NIKU, said in a statement.

The ship dates back more than 1,000 years to the time of the Vikings or even a bit earlier, Knut Paasche, head of the Department of Digital Archaeology at NIKU and an expert on Viking ships, said in a statement.

Radar images had enough resolution to make out what was left of the fore and aft, which had been nearly destroyed in the past by farming plows. The hull seems to be in good shape, according to a news report by Ars Technica. The radar also revealed the remains of two houses, likely part of a Viking settlement, but the archaeologists aren’t sure of the structures’ age. Archaeologists and local authorities hope to do a larger survey of the area around the ship burial. It’s not certain when the ship itself will be excavated, although it won’t be done in the near future, said a spokesperson for NIKU.

The survey at Edøy was done as a collaboration between Møre and Romsdal County, Smøla municipality and NIKU. The Ludwig Boltzmann Institute for Archaeological Prospection and Virtual Archaeology helped develop the georadar technology used in the survey.