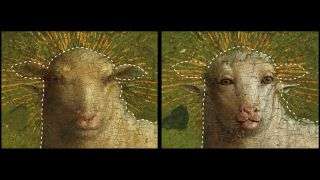 Restoration of a 15th-century painting of a sheep representing the sacrifice of Jesus had the internet freaking out earlier this year over the Jesus lamb’s uncannily human expression, which had been covered up by conservation work dating to centuries ago. New analysis of the painting reveals how and why that unnerving face was hidden from view.

The sheep — which is also bleeding from a chest wound into a golden chalice — appears in the centerpiece of an 18-panel religious painting called «The Adoration of the Mystic Lamb,» painted by brothers Jan and Hubert Eyck in 1432. The Mystic Lamb’s newly revealed face is eerily human and far creepier than the previous face, with forward-facing eyes and an expression that looks appalled with your terrible life choices.

However, the sheep’s face now looks more like it did when it was first painted, art experts conducting the restoration said in a statement. Non-invasive imaging analysis of the painting revealed how overpainting had changed the original. The Lamb’s new face, framed by ears that are positioned lower on its head, replaces a more naturalistic expression that was added during restoration work in the 16th century, according to the statement.

A first glimpse of the Lamb’s true face drew online attention (and sparked unease) earlier this year, and the reveal stunned art historians and scholars with its «shocking beauty,» Live Science previously reported.

Conservators in the 1950s first detected telltale signs of overpainting on the Lamb . But they only removed the paint around its head, revealing the original, lower pair of ears (and giving the sheep two sets of ears in the process). In 2019, an international team began more extensive conservation efforts on the panels, also known as the Ghent Altarpiece, removing it from its home at Saint Bavo Cathedral in Ghent, Belgium.

In art restoration work such as this, «everything starts with the observations of the conservators,» said Geert Van der Snickt, a cultural heritage scientist with the University of Antwerp in Belgium, and a lead researcher for the Ghent Altarpiece project.

«Prior to treatment, they study the paint surface extensively,» using stereomicroscope magnification to peer inside tiny cracks and estimate layer buildup, Van der Snickt told Live Science in an email. If conservators spot anything unusual, imaging techniques that use infrared, fluorescence and X-rays, provide a more detailed glimpse of hidden layers, sometimes revealing variations in paint composition that suggest the painting was altered.

«As this is typically done via deduction and provides hypothetical insights, we strive to confirm our findings by means of a limited number of paint cross-sections,» Van der Snikt said. «For the Ghent Altarpiece, we could take advantage of an old cross-section that was taken in 1950 and kept safe in the KIK-IRPA [Belgium’s Royal Institute for Cultural Heritage] for almost 70 years.»

After centuries of hiding, the Lamb’s true face was finally visible. In addition to the forward-looking eyes, its nostrils are smaller and higher, and the lips are pursed and more prominent, according to the statement.

Their analysis also revealed changes to the Lamb’s original body shape, squaring its rounded rump and straightening its sagging back. But these adjustments were done prior to the overpainting of the 16th century.

«It was either a change made by the Van Eycks themselves or a very early conservation intervention,» Van der Snikt said. «Since this is not entirely clear, the conservators decided to leave the body largely untouched.»

It is unknown why the Lamb’s face was so dramatically altered during the 16th century, though it’s possible that the artists may have been trying «to make the painting look good again» by adjusting it to reflect current aesthetics, Van der Snikt said in the email.

«Giving the Lamb a more naturalistic face might have been a sensible thing to do at that time, as the face with forward-looking eyes might have looked completely outdated,» Van der Snikt said.

– 7 biblical artifacts that will probably never be found

However, modern conservation priorities and methods differ greatly from those practiced centuries ago, and conservators today adhere more strictly toward preservation of the original artwork «as precisely as it was meant by the original artist and with minimal interventions,» he added. The artwork was also viewed differently during the 16th century, when it was considered primarily an object that served a functional, religious purpose.

«Today, we see the Ghent Altarpiece in the first place as a work of art, part of our cultural heritage,» Van der Snikt said.

Life after death: Man ‘was taken’ to hell in nightmarish near-death...