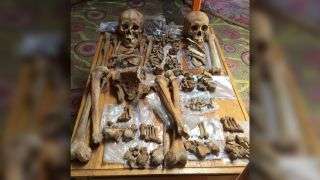 The remains of the older warrior woman (left) and her husband, which were excavated from the Airagiin Gozgor archaeological site, in the Orkhon province of northern Mongolia.

Archaeologists in Mongolia have found the remains of two ancient women warriors, whose skeletal remains indicate that they were well practiced in archery and horseback riding.

These two women lived during the Xianbei period (A.D. 147 to 552), a period of political fragmentation and unrest that gave rise to the Ballad of Mulan, the researchers said.

Perhaps these women were so athletic because during the Xianbei period, “it may have been that women were needed to defend home and country alongside the men,” said study researchers Christine Lee and Yahaira Gonzalez, bioarchaeologists at California State University, Los Angeles.

Lee added that many historians pin Mulan to the Xianbei period. There’s a lot of research into the Ballad of Mulan, and “my research just reinforces what they’ve been finding,” Lee told Live Science.

In the ballad, Mulan serves in the military so that her father doesn’t have to; but at that time, China didn’t have military conscription, Lee said. Moreover, the ballad notes that Mulan was fighting for the khan, a term used for Mongolian leaders. However, Chinese authors were the first to transcribe the ballad, which is probably why it’s seen as a Chinese story, Lee said.

The research, which is not yet published in a peer-reviewed journal, was slated to be presented at the American Association of Physical Anthropologists annual conference in mid-April, until the meeting was canceled due to the coronavirus pandemic.

Lee has worked in China and Mongolia for the past 16 years. She discovered the remains of the two women warriors during an excavation of a cemetery at the Airagiin Gozgor archaeological site, in the Orkhon province of northern Mongolia. Over the past four years, Lee and her colleagues have analyzed ancient human remains from 29 elite burials (16 males, 10 females, 3 unknown) at the site, for signs of prolonged horseback riding, archery and trauma.

In particular, she looked at bone marks from muscle attachments, as larger marks indicate that the muscles were heavily used; for instance, during archery. Markers of repetitive movement on the thumb were also indicative of archery, Lee said. She also looked for trauma patterns in the spine that are common in people who ride horses.

While many of the men and adolescents had signs suggestive of archery and horseback riding, and some of the women had marks indicating they did one or the other, the two warrior women had signs of both, said Lee, who is the lead researcher of the study.

“They were probably pretty badass,” Lee said. “They’re doing what the men are doing. So, you can extrapolate from that [and say] that they have some gender equality.”

Any form of gender equality was momentous for that period in Asia. “In neighboring China at that time, women were secluded,” Lee said. “The ideal woman was helpless and docile, while being in the north [in Mongolia], they’re not.”

The Mongolian culture didn’t have a written language before Genghis Khan (1162 to 1227), but other cultures, including the Chinese, Koreans and Persians, wrote about the Mongolians, Lee said. By the A.D. 900s, women in Mongolia were enjoying freedoms not found in contemporary cultures; the Mongolians had queens who led armies and received emissaries from the Pope, Lee said. In addition, women were able to inherit property and decide whom they wanted to marry, she said.

“If they’re already that independent by 900 A.D., my thinking was that you [can] extrapolate backward, at least a couple hundred years, because it has to come from somewhere,” Lee told Live Science.

In essence, the Chinese were disparaging anybody who lived north of the wall, Lee said.

Of the two warrior women, one was older than 50 and the other was about 20 years old. It’s possible they practiced archery and rode horses because these skills were needed during the political instability that following the collapse of the Han Dynasty in China in A.D. 220, Lee said.

Neither woman had signs of war trauma. This could be because both women were found in elite graves, and elite people may not have fought in battles, Lee said.