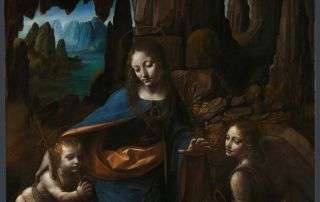 An image shows part of the Virgin on the Rocks. The hidden baby Jesus is in the right side of this frame.

The Leonardo da Vinci painting the “Virgin of the Rocks” was hiding another image beneath its surface: a winged baby Jesus, a new X-ray examination has revealed.

This isn’t the first signal that the “Virgin of the Rocks” hid older sketches that might have led to a different masterpiece. A similar effort, using infrared light in August 2019, revealed a sketch of a different Virgin Mary posed higher in the frame, as Live Science previously reported. But this new scan of the painting using a technique called macro X-ray fluorescence (MA-XRF) —  as well as a new algorithm to interpret the data — revealed the head and wings of this unseen baby Jesus.

“It was like looking for a needle in a haystack, but such a great feeling to see the wings and head finally uncovered,” Pier Luigi Dragotti, a professor at the Imperial College London’s Department of Electrical and Electronic Engineering, said in a statement.

MA-XRF works by exciting individual chemical elements in the paint, causing them to faintly glitter in ways a sensitive scanner can pick up. It’s been used for a bit more than a decade to study old paintings, according to a paper published March 2018 in the Microchemical Journal. The newly uncovered baby Jesus was found thanks to a new algorithm to interpret the MA-XRF data. Developed by Dragotti, it turned more of the task of hunting through huge piles of MA-XRF data over to a computer, which was able to help discern the patterns of the hidden sketches and reveal features humans might have missed.

The key element that’s been helpful in revealing the sketches was zinc. Da Vinci’s original sketch must have used a substance that contained it. Once that feature was identified, the researchers knew what to look for in order to reveal new hidden details.

“Before, we were getting very weak signals from the zinc within the painting due to its overlap with other elements, but the algorithm has given us more confidence in the signals that relate to the underdrawing,” Catherine Higgitt, a researcher at the National Gallery in London who was also responsible for the sketch’s discovery, said in the statement.

It’s unclear why da Vinci covered up his original sketch. This is the second time da Vinci painted a Virgin on the Rocks scene but the final painting looks much more like the original, separate painting he made than the hidden sketch did.