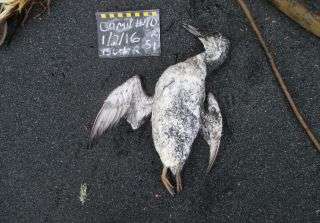 Thousands of common murres such as this one died and washed ashore as a result of a marine heat wave known as “the blob.”

Five years ago, tens of thousands of emaciated seabirds washed ashore on the Pacific Coast. Now, scientists know why: a long-lived marine heat wave known as “the blob.”

The common murre () is a black and white seabird that reaches about 1 foot (0.3 meters) long and can dive hundreds of meters deep into water in search of prey. These seabirds feast on tiny “forage fish” such as sardines, herring and anchovies, and need to consume about half of their body weight every day in order to survive.

But a couple of years ago, their feast disappeared. In 2013, surface waters began to heat up off the Pacific coast, a phenomenon that became known as “the blob.” These warmer waters — the most powerful ocean heatwave that was ever recorded — continued until 2015. The waters warmed even further when a powerful El Niño — another ocean-atmosphere phenomenon that causes a period of warming sea surface temperatures — arrived in 2015 and 2016.

The warm waters spelled trouble for creatures both on land and in the water. A number of species experienced similar mass die-offs, including tufted puffins, sea lions, baleen whales and Cassin’s auklets, according to a statement.

But no species died off quite at the level of these common murres. Between 2015 and 2016, 62,000 dead or dying common murres washed up on Pacific shores from California to Alaska. “So far, no evidence for anything other than starvation was found to explain this mass mortality,” the researchers wrote in the study. What’s more, previous studies revealed that only a fraction of the dead seabirds  wash up on shore. That means that the number of common murres that died likely reached about 1 million, they wrote.

“The magnitude and scale of this failure has no precedent,” lead author John Piatt, a research biologist at the U.S. Geological Survey’s Alaska Science Center and an affiliate professor at the University of Washington School of Aquatic and Fishery Sciences said in the statement. “It was astonishing and alarming, and a red-flag warning about the tremendous impact sustained ocean warming can have on the marine ecosystem.”

What’s more, about two-thirds of the birds were killed as adults, which was a “substantial blow to breeding populations,” the authors wrote in the paper.

Previous studies had found that the blob reduced the number of phytoplankton in the water and increased the metabolism of cold-blooded critters such as zooplankton, small forage fish and larger predatory fish like salmon and pollock.

That means that predatory fish — which compete for similar food as the murres — needed to eat more forage fish than usual to survive. The blob is now gone, but scientists recently identified another marine heatwave forming off the coast of Washington and up into the Gulf of Alaska, according to the statement.

“All of this — as with the Cassin’s auklet mass mortality and the tufted puffin mass mortality — demonstrates that a warmer ocean world is a very different environment and a very different coastal ecosystem for many marine species,” Julia Parrish, a professor in the University of Washington’s School of Aquatic and Fishery Science said in the statement. “Seabirds, as highly visible members of that system, are bellwethers of that change.”

The findings were published Jan. 15 in the journal PLOS ONE.