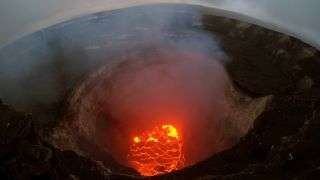 The 2018 eruption of Kilauea in Hawaii featured the spectacular collapse of the volcano’s caldera, creating a hole nearly as deep as One World Trade Center in New York City is tall at its summit. Now new research finds that this dramatic change was triggered by only a small leak of magma from the reservoir beneath the peak.

Instantaneous and explosive caldera collapses, such as the event that formed Oregon’s Crater Lake 7,700 years ago, are a better known phenomenon. But the new findings suggest that slow-motion collapse events such as Kilauea’s—which are vastly different in nature—may be occurring at volcanoes around the world. In fact, a comparable one occurred at Bardarbunga’s caldera in Iceland between 2014 and 2015.

“What we have learned from these two events (Kilauea and Bardarbunga) is that there may not be much warning,” says geophysicist Magnus Tumi Gudmundsson, who studied the Bardarbunga collapse but was not involved in the new Kilauea research. At first, Gudmundsson says, caldera-collapse eruptions look a lot like typical eruptions. “Then, when conditions are right, the magma chamber underneath a volcano can just split apart, and magma can flow freely, and the caldera roof collapses.”

Kilauea is a 1,250-meter-tall, broad shield volcano on the southeastern coast of Hawaii’s Big Island. In 1983 it began belching lava from its Eastern Rift Zone, an area fractured by fissures created as gravity pulls the entire area downward, toward the sea. That eruption culminated furiously in May 2018, when the lava lake within the caldera, or crater, at the volcano’s summit began to drain like a bucket with a hole in it. Simultaneously, the lower part of the Eastern Rift Zone came alive with lava fountains and new fissures, one of which spouted a river of lava that flowed through residential neighborhoods and into the sea. More than 700 homes and other buildings were destroyed before the eruption stopped in August 2018.

A lava lake forms in the Leilani Estates subdivision, situated in Kilauea’s East Rift Zone in Hawaii, on May 23, 2018 amid eruptions from the Kilauea volcano.

The disaster took place under the watchful eyes of more scientific equipment—including drones, GPS sensors, thermal cameras and satellite-based radar—than any caldera-collapse eruption in history. “Some of the detail you get from Kilauea is unlike anything we’ve seen before,” Gudmundsson says.

In three separate papers published this week in , researchers wove together much of the data from those instruments to tell the tale of Kilauea’s eruption from summit to sea. The first revelation, discovered in a study led by U.S. Geological Survey geophysicist Kyle Anderson, was that the eruption caused the caldera collapse rather than the other way around. That relationship had been a geologic chicken-and-egg question debated among scientists, but at both Bardarbunga and Kilauea, the eruption clearly came first. Anderson and his team found that the rifting of the island, which occurs as gravity drags the slope of Kilauea seaward, opened up fissures for magma to drain from the volcano’s reservoir and the lava lake above it. When the magma below the caldera disappeared, all the rock in its floor crumbled down more than 500 meters over an area of five square kilometers. Once the caldera floor buckled, it pressurized the whole underground magma plumbing system like a piston—increasing and prolonging the eruptive activity in the rift zone.

Previously there were no good estimates of how much magma drainage is necessary for a collapse, but Anderson says the Kilauea eruption demonstrated that it can take remarkably little to kick off this fiery process. “Before the first collapse, really only a very small fraction of the magma was removed—almost certainly less than about 3.5 to 4 percent,” he says. Kilauea’s summit caldera may have already been thin and faulted and thus weak, Anderson adds. It remains to be seen if other calderas are similarly vulnerable.

This aerial photograph looks west across Kilauea’s summit on June 12, 2018, after the onset of the caldera collapse. Parts of the crater floor had subsided as much as 180 meters as intact blocks.

The connection between the caldera collapse and the lava flow in the lower Eastern Rift Zone was evident in real time, says Matthew Patrick, a geophysicist at the USGS’s Hawaiian Volcano Observatory. In a separate paper, he and his colleagues found that the lava river flowing through the rift zone experienced hours-long surges that occurred within minutes of the collapses at the summit caldera, 40 kilometers away. These lava floods resulted from pressure pulses created by the collapsing caldera, Patrick says. The pulses sometimes caused the lava channel to overtop its banks, creating new rivulets that threatened nearby property. A geochemical analysis of lava in the rift zone, led by University of Hawaii at Hilo volcanologist Cheryl Gansecki, further cemented the caldera–rift zone connection. It found that hotter magma, likely from the summit reservoir, mixed with magma left over from older eruptions.

Kilauea is not likely to erupt with such vigor again until its magma chamber refills with molten rock from the earth’s mantle, which could take years to decades. But there are other, similar volcanoes sitting in rift zones around the world, from Iceland to the Galápagos Islands, and the information learned at places like Kilauea and Bardarbunga could help illuminate how those far-flung calderas might collapse.

“Well-monitored caldera collapses can provide crucial information about the magma plumbing system beneath these volcanoes,” says Michelle Parks, a geophysicist at the Icelandic Meteorological Office, who was not involved in the new research. These novel details could include how magma is stored, how much of it is available to erupt and how it migrates, she says, adding, “All of this information is critical for determining the potential style of the eruption—and also the size of the eruption.”