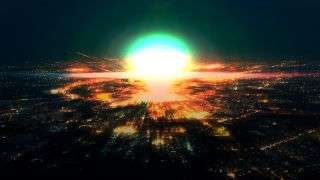 Humanity’s headlong dash toward our own destruction is marked in minutes and seconds in the ticking of the hypothetical Doomsday Clock. How close we are to destroying ourselves registers in the nearness of the clock’s hands to midnight — the hour of absolute extinction.

In 2019, the clock’s “timekeepers” with the Bulletin of the Atomic Scientists (BAS) fixed the hands at two minutes to midnight; that time, set in 2018, is the closest the clock’s hands have come to doomsday since 1953, when the U.S. and the Soviet Union detonated the first hydrogen bombs.

And now the fictional clock ticks forward; its hands rest at 100 seconds to midnight, BAS president and CEO Rachel Bronson announced today today (Jan. 23) in Washington, D.C. This new time indicates that humanity has entered “into a realm of a two-minute warning”, in which every precious second will count if we want to forestall global catastrophe, Bronson said.

“Danger is high, and the margin for error is low,” she said.

When the Doomsday Clock was introduced in 1947, the primary threat to humanity was nuclear weapons. That threat still exists today, but it has company: catastrophic climate change and disruptive technologies are also considered by BAS in their assessment of whether humanity is safer or more at risk than we were the year before.

In 2019, nuclear and climate conditions continued to deteriorate, and decisions by global leaders not only failed to reduce the damage — they made dangerous situations worse.

“Over the last two years, we have seen influential leaders denigrate and discard the most effective methods for addressing complex threats,” Bronson said. Prior nuclear treaties are crumbling, new agreements between the U.S. and Russia are no closer than they were a year ago, and negotiations between the U.S. and North Korea regarding nuclear weapons reduction have been abandoned, according to Bronson.

The shadow of nuclear war also hovers over the Middle East; since 2018, when President Donald Trump withdrew the U.S. from a nuclear deal with Iran, tensions between the two nations have simmered. They finally erupted when a U.S. strike killed Iranian military leader Qassem Soleimani on Jan. 3. Days later, Iran threatened withdrawal from the nuclear deal, and Trump proposed that the deal’s other signatories — Germany, France and the United Kingdom — should also abandon the deal, though they have not done so, Business Insider reported.

While the Doomsday Clock was set in November, prior to the U.S. actions against Iran, the events of recent weeks only confirm the board’s assessment months earlier: “that we are rapidly losing our bearings in a nuclear weapons landscape that may expand beyond our recognition,” Bronson said.

The hands of the Doomsday Clock now stand at 100 seconds to midnight. Disruptive technologies

The development of artificial intelligence (AI) for use in weapons “that make kill decisions,” and its use in military control and command systems is another new cause for concern, said Robert Latiff, a retired U.S. Air Force Major General and an adjunct faculty member with the John J. Reilly Center for Science, Technology, and Values at the University of Notre Dame in Indiana.

Even space has become “a new arena for weapons development” with the announcement of the U.S. Space Force, a new division of the U.S. Armed Forces that includes “preparing for space combat” as one of its primary goals, according to Latiff.

Equally troubling is the growing deluge of “fake news” (and its support by prominent politicians) and the rise of “deepfake” footage — digitally manipulated video that is increasingly difficult to distinguish from the real thing. By blurring the lines between truth and fiction, these technologies disrupt information and trust, introducing “a dangerous global instability,” Latiff said.

2019 also brought alarming new evidence of climate change’s momentum, and demonstrated its destructive power. In fact, humanity’s disruption of climate on land and in the oceans is “unprecedented,” according to a report released in Sept. 2019 by the Intergovernmental Panel on Climate Change (IPCC), the United Nations body that evaluates the impacts of climate change.

Globally, the year was the second-hottest since record keeping began in 1880, and the past decade was the warmest on record, NASA reported earlier this month. July 2019 smashed records as the hottest month ever recorded on Earth, after a sweltering heat wave baked countries across Europe and then flowed over Greenland, where it melted 217 billion tons (197 billion metric tons) of ice.

Ocean temperatures are warmer than they’ve been at any point in human history, and they’re heating up at an accelerating rate. The world’s thickest mountain glacier is retreating, the Sahara Desert expanded by about 10%, and the Arctic’s most stable sea ice is disappearing.

Severe drought in Australia, also linked to climate change, fueled devastating brushfires that blazed across the continent over recent months. The flames destroyed thousands of homes, damaged fragile ecosystems and killed an estimated 1.25 billion animals, according to the World Wildlife Fund.

And in a report published in August 2019 in the journal Science, scientists warned that rising sea levels, extreme weather events and other disasters such as famines and fires caused by climate change could soon make coastal cities uninhabitable, displacing up to 1 billion people.

“The state of the world does, indeed, demand an emergency response,” Sivan Kartha, a senior scientist at the Stockholm Environmental Institute in Sweden, said at the BAS announcement.

Though years have passed since the historic Paris Agreement, a global compact to reduce fossil fuel emissions, was signed in 2016, “we’re far off course” from achieving its goals, Kartha said. However, recent surges in climate activism — despite politicians’ inaction and widespread disinformation campaigns that discredit climate science — suggest that the public finds the climate emergency too dire to ignore, he added.

“An environment of misery”

While the Doomsday Clock marks the stroke of midnight as the hour of humanity’s annihilation, in reality, the multiple threats of nuclear weapons, climate change, pandemics and weaponized technology will more likely ring in an apocalypse that “probably won’t be quick or final,” futurist and author Jamais Cascio wrote in Oct. 2019 for the journal BAS.

“It will be an environment of misery, not an event or an end point,” Cascio wrote. “Although worst-case scenarios theoretically make it easier to prevent dire outcomes, in the case of slow-moving apocalypses such as climate change, it’s difficult for humans to envision the scale of the problem and to imagine how we will actually experience it,” he explained.

Nevertheless, however large the threat of annihilation looms, that doesn’t mean all hope is gone, Cascio added.

“If we can’t stop the disaster, perhaps we can minimize the harm,” Cascio said. “Most important, acknowledging the sheer resilience of humanity might be the kick needed to keep fighting, even when things look lost.”