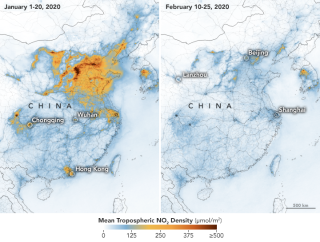 A map shows the sharp decline in emissions over China between early January and late February as parts of the country went on lockdown in an attempt to contain the COVID-19 coronavirus.

The new coronavirus’ impact on China is so stark that it can be seen from space — as a dramatic drop in air pollution, according to data from U.S. and European satellites.

Orbital instruments designed to monitor air quality picked up a substantial drop in concentration of nitrogen dioxide (NO2) pollution since January. NO2 is a harmful substance emitted by gas vehicles, power plants and other machines that burn fossil fuels.  The decline is likely related to an economic slowdown and travel restrictions in China since the virus became widespread, according to a statement from NASA Earth Observatory.

«This is the first time I have seen such a dramatic drop-off over such a wide area for a specific event,» Fei Liu, an air quality researcher at NASA’s Goddard Space Flight Center, said in the statement.

A NASA Earth Observatory image, visible at the top of this article, shows an astonishing decline in NO2 between January and the start of February.

Liu said that there have been other incidents that led to measurable NO2 decreases, including the 2008 economic recession. But none have been so intense or happened so quickly. She also noted that there’s often a noticeable drop-off around this time as China celebrates the Lunar New Year, but that it’s never before been so stark.

«This year, the reduction rate is more significant than in past years and it has lasted longer,» she said. «I am not surprised because many cities nationwide have taken measures to minimize spread of the virus.»

The Chinese government has closed business and restricted travel between cities. Wuhan, the city where the outbreak began, has been the subject of especially harsh measures. The impact of those measures is reflected in local pollution levels; a map of the city shows an astonishing drop in NO2 levels between Jan. 1 and Feb. 25.

Another map shows the sharp decline in emissions over Wuhan, the city that was the epicenter of the viral outbreak.

As the virus continues to spread worldwide and governments continue to take measures to fight it, such second-order impacts could show up around the globe.