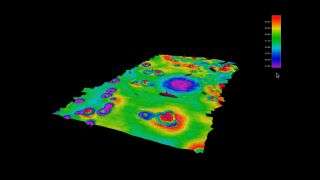 SAN FRANCISCO — Today, all seems quiet in the remote Bikini Atoll, a chain of coral reef islands in the central Pacific. But more than 70 years ago, this region’s seafloor was rocked by powerful atomic bombs detonated by the U.S. Army.

For the first time, scientists have released remarkably detailed maps of this pockmarked seabed, revealing two truly massive craters. This new map shows that the seabed is still scarred by the 22 bombs detonated at Bikini Atoll between 1946 and 1958.

The map was presented yesterday (Dec. 9) at the annual meeting of the American Geophysical Union.

During the 1946 nuclear weapons test known as “Operation Crossroads,” the U.S. wanted to test the impact of nuclear bombs on warships. To that end, the Army assembled more than 240 ships — some of which were German and Japanese — that held different amounts of fuel and munitions, then deployed two nuclear weapons to destroy them, researcher Arthur Trembanis, an associate professor with the College of Earth, Ocean, and Environment at the University of Delaware, said in the presentation.

At the time of the tests, Trembanis said, comedian Bob Hope joked grimly:

“As soon as the war ended, we found the one spot on Earth that had been untouched by war and blew it to hell.”

A 3D-printed model shows one of the submarines placed in Bikini Atoll waters to test the power of a nuclear bomb.

One of these tests, known as “Baker,” was the first to detonate an atomic bomb underwater, on July 5, 1946.

“The bomb went off in a microsecond,” Trembanis said. “Within seconds more than 2 million tons of water, sand and pulverized coral shot in the air, in a column more than 900 feet [274 meters] wide and 1 mile [1.6 kilometers] high.”

Though the National Parks Service surveyed Bikini during the late 1980s and early 1990s, the crater from the Baker blast wasn’t visible, Trembanis said.

“We needed advanced sonar to be able to see this large feature,” Trembanis said.

When he and his colleagues visited the site, they mapped an area about 1.5 times the size of Central Park in New York City, creating digital models at a resolution of 1 meter per pixel and representing more than 20 million data sounding points.

Seen at that resolution, the Baker crater was astonishing in its depth and breadth. Contrary to the scientists’ expectations, time hadn’t smoothed the crater’s rough interior. Rather, the crater still showed distinct “ripples” — structures that radiated from the center of the bomb blast, “like if somebody dropped a very large pebble onto the sea bed,” Trembanis said. “It seemed as if Captain Marvel herself had punched the planet and put a dent in it.”

But as powerful as the early atomic tests were, they were dwarfed by the later blasts caused by hydrogen and fusion bomb tests in the 1950s. The researchers investigated a crater that was 184 feet (56 m) deep and had an unusual oblong shape; they determined that it was a composite crater from multiple blasts: “Castle Bravo,” a 15-megaton bomb that was the largest ever detonated by the U.S., and “Castle Romeo,” the first deployed thermonuclear bomb.

These tests left behind a uniquely devastating array of shipwrecks and craters, and the first detailed map of their aftermath will help scientists to tell this untold story and connect to “a moment at the dawn of the nuclear age,” Trembanis said. “Our new findings provide insights into previously unknown conditions at Bikini and allow us to reflect on the lasting consequences from these and other tests.”

MH370 news: Why experts think plane ‘could have landed safely’

The True Story Of The Man In The Iron Mask