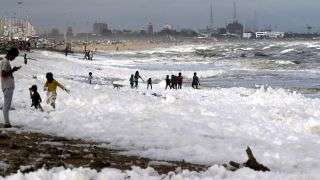 Children play on Marina beach in Chennai, India, which is blanketed in sea foam, Dec.1, 2019.

A beach in India is coated in knee-deep foam that experts warn is toxic.

But that danger hasn’t stopped tourists from frolicking in the surf-churned white froth, according to the news organization AFP. The stretch of coast, Marina Beach in Chennai, is the largest urban beach in India and sees tens of thousands of visitors daily.

The foam is also a recurrent visitor to the beach, appearing each year when the monsoon rains wash pollution into the sea, according to AFP. The foam is likely the result of a mixture of washing detergent residue and other waste, whipped into a froth by wind and waves. Only 40% of Chennai’s wastewater is treated, Pravakar Mishra, a scientist at the National Centre for Coastal Research in Chennai, told AFP. The rest of the sewage from the city of more than 7 million people washes directly into the sea.

The foam has the potential to cause skin irritation and damage, and fishermen have been warned to stay out of the water. One fisherman named Jeyaseelan told AFP that the value of the fish he has caught has plummeted to nothing, as locals suspect that the fish are contaminated by the visible pollution on the beach. In 2016 and 2017, pollution run-off caused mass fish die-offs on the coast near Chennai.

Pollution is a growing problem in India. Smog and particulate matter clog the country’s rapidly-expanding urban areas, and poor water sanitation practices have created toxic waterways. In one striking example in 2017, a half-dozen bright blue dogs were spotted in a suburb of Mumbai. The dogs had entered the Kasadi River near an industrial plant that was releasing blue dye directly into the waterway. Plastic pollution and other garbage also mar beaches like Marina, Mishra told AFP.

“Pollution is now a bigger threat to India’s beaches than the rising seas,” he said.