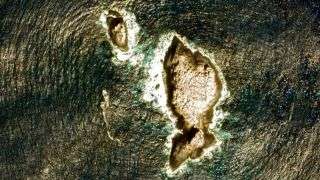 The Gardner Pinnacles are all that’s visible of what is now considered the world’s largest, and hottest, volcano. It’s called Pūhāhonu, and it lies northwest of Honolulu, Hawaii.

Poking out of the sea 590 miles (952 kilometers) northwest of Honolulu, Hawaii, two barren peaks rear their heads. The little pinnacles, which stand about 170 feet (52 meters) above sea level at their highest point, bely a monstrous mountain of ancient magma beneath them. Turns out, these two unassuming nubbins are actually the tips of Pūhāhonu — the single largest volcano on Earth, scientists have found.

Pūhāhonu — meaning “turtle rising for breath” in Hawaiian — is part of the long chain of undersea mountains and volcanoes that stretch from the Hawaiian Islands to the eastern edge of Russia. Many of the chain’s 120-or-so volcanoes are long dead and buried beneath the waves, though the relatively young peaks that make up the Hawaiian Islands still tower over the land (and, occasionally, blow their tops).

Mauna Loa, the gently-sloping behemoth that bulges out of Hawaii’s Big Island, has long been designated the world’s largest volcano. From its base on the seafloor to its summit thousands of feet over the island, Mauna Loa rises more than 30,000 feet (9,170 m) — making it technically taller than Mount Everest — and encompasses more than 19,200 cubic miles (80,000 cubic km) in volume. There’s no question it’s gargantuan; however, researchers now claim that Pūhāhonu actually has Mauna Loa beat — thanks largely to tens of thousands of cubic miles of volcanic rock buried beneath the ocean floor.

In the new study, these researchers used sonar and gravity detectors to measure Pūhāhonu’s entire topographic footprint, from the wee peaks standing over the sea to the deep rocks sinking hundreds of feet below the Earth’s crust. The team found that Pūhāhonu contains approximately 36,000 cubic miles (150,000 cubic km) of rock — giving it a volume more than twice that of Mauna Loa.

These two little peaks, called the Gardner Pinnacles, are all that is visible of the world’s largest volcano.

Only a fraction of that volume — about 30% — is visible above the seafloor, the team wrote; the rest stabs so deeply underground, that Pūhāhonu has actually caused the crust beneath it to sink by hundreds of miles over the 14 million-years-or-so since the volcano formed.

“The new volume calculation shows that Pūhāhonu is substantially larger than any other Hawaiian volcano including Mauna Loa, which was presumed to be the largest volcano on Earth,” the researcher wrote in the study, to be published in the July 15 issue of the journal Earth and Planetary Science Letters.

The findings get even hotter — Not only does that make Pūhāhonu the largest volcano on Earth by volume, but it may also be one of the hottest, the researchers wrote. As part of their study, the team examined several samples of olivine — a mineral that forms when magma cools and crystallizes — collected from various parts of the volcano. From the olivine’s composition, the team inferred the temperature of the volcano’s magma before it crystallized. They estimated that Pūhāhonu’s magma must have been about 3,100 degrees Fahrenheit (1,700 degrees Celsius) when it first flowed — giving the volcano the hottest recorded magma on Earth.

Not bad for a tiny turtle head.