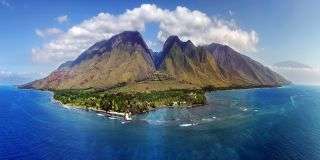 Just like zits, volcanic islands don’t last forever. Some are oldtimers, like the more than 20-million-year-old Canary Islands in the Atlantic, while others have already drowned, like some of the Galapagos Islands in the Pacific.

Why do some islands hit the longevity jackpot? The answer has to do with two factors; tectonic-plate speed and mantle-plume size, according to a new study published online Jan. 1 in the journal Science Advances.

These factors bode well for Hawaii, which was dealt a good hand in terms of lifespan, the researchers noted.

Volcanic islands form when hot plumes of rock rise out of the Earth’s mantle, piercing the crust. As tectonic plates move,  but plumes stay in place, more islands can form, leading to chains known as archipelagos.

However, Earth’s relentless forces, such as waves and wind, constantly batter islands, eventually causing them to drown in the sea. Until now, it wasn’t clear exactly what factors led some islands to live longer than others.

To investigate, researchers at the Massachusetts Institute of Technology looked at 14 major volcanic island chains around the world. They looked at the direction and speed the islands’ tectonic plates were moving relative to the hotspot underneath. In addition, the research team measured the length of each swell, which is formed when the mantle plume raises the seafloor around the island, making it shallower than the surrounding seafloor.

Then, the researchers divided the swells’ lengths by their plate velocity. The resulting number showed the average time a volcanic island spent on top of a plume’s swell, which in turn determined how long that island would remain above water.

When the team compared their calculations to the actual ages of each island, including drowned ones, they found a strong correlation between time spent on top of a swell and time spent above sea level. In essence, their results showed that a volcanic island’s lifespan depends on its tectonic plate’s speed and the size of the plume, or the swell it generated.

Put another way, if an island forms on a fast-moving tectonic plate, it will likely have a short lifespan, the researchers said. However, if there is a large plume, as the Hawaiian islands have, then the lifespan is much longer.

Hawaii is lucky in this regard; The islands sit on the fast-moving Pacific plate, but their plume is enormous — one of the largest plumes on Earth, the researchers said. Because the plume was so big, it took a long time for the plate to slide over it, ensuring the islands’ longevity.

The Galapagos Islands also sit on fast-moving tectonic plates, but they’re situated over a much smaller plume, the scientists said. Meanwhile, the Canary Islands, one of the oldest known island chains in the world, sit on the slow-moving Atlantic plate, on top of a relatively big plume.

An island’s lifespan plays a role in how its plants and animals evolve.

“If an island spends a long time above sea level, that provides a long time for speciation to play out,” study lead researcher Kimberly Huppert, a former MIT graduate student of geology, said in a statement. (She is now a senior research scientist at the GFZ German Research Centre for Geosciences in Potsdam, Germany.) “But if you have an island chain where you have islands that drown at a faster rate, then it will affect the ability of fauna to radiate to neighboring islands.”

“The Galapagos is a very fast-moving treadmill, with islands moving off very quickly, with not a long time to erode, and this was the system that led to people discovering evolution,” study co-researcher Leigh Royden, professor of Earth, atmospheric and planetary sciences at MIT, said in the statement.

Some of these so-called treadmills move faster than others, however.

“What Kim [Huppert] has shown is, there’s a geophysical mechanism that controls how fast this treadmill is moving and how long the island chains go before they drop off the end,” study co-researcher Taylor Perron, associate head of MIT’s Department of Earth, Atmospheric and Planetary Sciences, said in the statement.

The research was paid for, in part, by NASA.