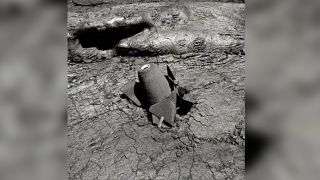 This pointer bomb was dropped into Mauna Loa volcano in 1935 and was photographed in 1977 by Hawaii Volcano Observatory’s geologist Jack Lockwood in 1977.

In late February, a hiker on Hawaii’s Big Island stumbled across two unexploded bombs on the flank of the Mauna Loa volcano. Those bombs, it turns out, were the remnants of a 1935 attempt to divert a lava flow.

Whether the “bomb the volcano” strategy worked is a matter of some debate, according to a new blog post by the Hawaiian Volcano Observatory (HVO). The lava flow did begin to slow the next day, and the man whose idea the bombing was claimed victory. Scientists at the time and today, though, believe the slowing flow was almost certainly a coincidence.

The two rusty bombs were found by adventurer Kawika Singson, who was hiking on Mauna Loa’s lava fields on Feb. 16 and stumbled across the bombs inside a lava tube, according to West Hawaii Today. Hawaii has a history of trying to bomb lava flows, according to the newspaper: The strategy was tried in 1935 and 1942.

The bombs Singson found, though, were from the 1935 attempt, according to HVO. They are small “pointer bombs,” which contain only a small charge and were used for aiming and targeting a set of 20 MK I demolition bombs, each of which contained 355 pounds (161 kilograms) of TNT.

The idea to drop bombs on Mauna Loa came from the founder of HVO, volcanologist Thomas A. Jaggar, Jr. In November 1935, Mauna Loa began erupting, and a vent on the volcano’s north flank belched lava into a growing pond. That December, the pond breached, sending a flow of lava toward the city of Hilo at a rate of 1 mile (1.6 kilometers) per day. Soon, the lava threatened to spill into the Wailuku River, which could cut off Hilo’s water supply.

Alarmed, Jaggar called in the U.S. Army Air Corps. He hoped that dropping bombs near the source of the flow would open up new flows at the lava vents, diverting the river of molten rock away from Wailuku.

“Our purpose was not to stop the lava flow, but to start it all over again at the source so that it will take a new course,” he said in a radio broadcast at the time, according to HVO.

That didn’t happen. The bombs fell on Dec. 27, but did not create any new eruptive activity on the vents. However, the lava flow did slow, and the vent’s eruption halted by Jan. 2. Jagger called it a success, saying that the lava flow would not have stopped so quickly had the bombs not been dropped. In 1939, after the eruption had ended, he visited the bombing sites and claimed that the bombs had smashed into lava tunnels, exposing eruptive lava to air and cooling it. This, he said, created a dam of cooling lava that plugged the vent.

Notably, this wasn’t what Jagger had expected to happen; he thought the bombs would trigger new lava flows in different directions, not plug the vent altogether. And a 1970s investigation suggested that his interpretation of how well the bombing had worked was wishful thinking.

“Ground examination of the bombing site showed no evidence that the bombing had increased viscosity, and … the cessation of the 1935 flow soon after the bombing must be considered a coincidence,” the investigators concluded.

Today, HVO scientists think Jagger’s bombing happened as the lava flow was already waning. There may be times when diversion could work, they wrote in 2014, but the effort involved is Herculean and may only delay the inevitable, should nature decide to take its course.

New Jersey man passes off fake $100 bill with ‘For Motion...