The strange clouds, known as “lenticular clouds”, are often mistaken for alien spacecraft. The time-lapse video, shared by NASA, shows the clouds in a series of images, lit up by orange glow of the volcano’s lava. The unusually shaped clouds are formed when moist air is forced to flow upwards near a mountain or volcano.

The clouds are formed mostly in the troposphere, the lowest layer of Earth’s atmosphere.

The clouds have often been mistaken for UFOs throughout history, due to their smooth, round structure.

The images were shared by astrophotographer Dario Giannobile on Twitter, captioned “Earthshine Moon and Lenticular Cloud Over Mount Etna Eruption”.

NASA shared the picture on Monday as its astronomy picture of the day. NASA explained: “What’s happening above that volcano? Although Mount Etna is seen erupting, the clouds are not related to the eruption. 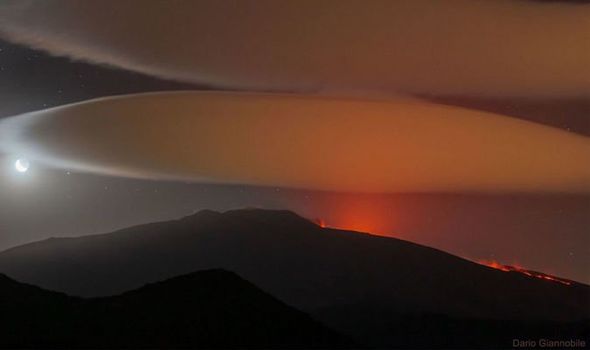 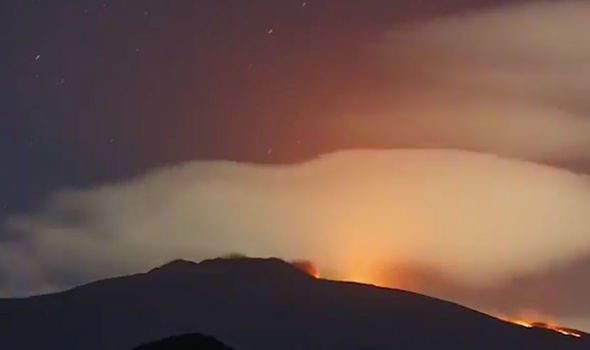 “They are lenticular clouds formed when moist air is forced upwards near a mountain or volcano.

“The surreal scene was captured by chance late last month when the astrophotographer went to Mount Etna, a UNESCO World Heritage Site in Sicily, Italy, to photograph the conjunction between the Moon and the star Aldebaran.

“The Moon appears in a bright crescent phase, illuminating an edge of the lower lenticular cloud. Red hot lava flows on the right.

“Besides some breathtaking stills, a companion time-lapse video of the scene shows the lenticular clouds forming and wavering as stars trail far in the distance.” 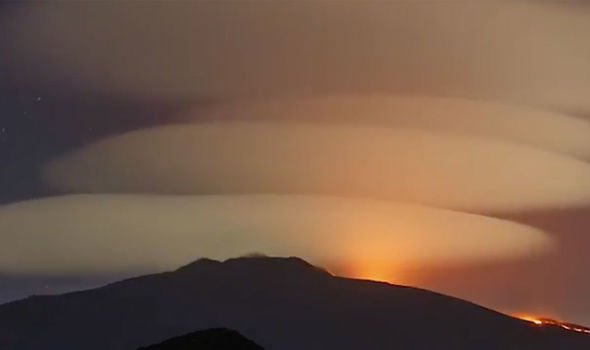 Mount Etna is the most active volcano in Europe, with explosive activity increasing at its New Southeast Crater (NSEC) in July.

The volcano last erupted in May, spewing lava in a number of substantial eruptions.

Mount Etna, towering above Catania, Sicily’s second-largest city, has one of the world’s longest documented records of historical volcanism, dating back to 1500 BCE.

The National Institute of Geophysics and Volcanology (INGV) said their surveillance cameras showed increased gas emissions from the base of the southern flank of NSEC, indicating that a new fissure has opened at the crater.

Despite this, Mount Etna is considered as one of the safest volcanos in the world, with communities living around the site and a host of tourist spots present.

The eruptions are thought to have caused a total of 77 deaths in its history.

Its unpredictable behaviour sees it being one of the most guarded volcanos in the world.

Tourists are able to climb up Mount Etna, yet are urged to take extra and specific precautions and walk in groups.