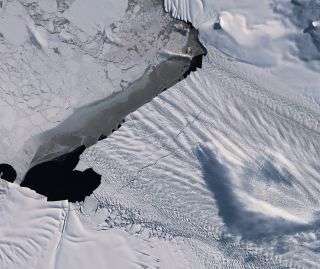 A photo from Europe’s Copernicus Sentinel-2 satellite shows two gargantuan cracks forming along the edge of Antarctica’s Pine Island Glacier, one of the fastest-shrinking glaciers on the continent.

Pine Island Glacier, one of the fastest-shrinking glaciers in Antarctica, has just lost another huge chunk of ice to the sea, continuing a troubling trend that has become a near-annual occurrence in the last decade.

Scientists at Copernicus, the European Union’s Earth observation program, have been closely monitoring the glacier since large cracks appeared near its edge in October 2019. Yesterday, those cracks finally cut a chunk of the glacier away (a process known as calving), releasing a giant jigsaw puzzle of fresh icebergs into the nearby Amundsen Sea. In total, the icebergs measure about twice the size of Washington, D.C., in area (more than 130 square miles, or 350 square kilometers), according to The Washington Post.

On its own, the recent calving event is not entirely surprising or particularly threatening to global sea levels; calving is a normal part of life for ice formations with sections that float on the water, according to NASA’s Earth Observatory. Because ice at the edge of the glacier was already floating, this ice will not directly contribute to sea level rise when it inevitably melts.

However, over the past two decades, calving events have been occurring much more frequently at Pine Island Glacier and the neighboring Thwaites Glacier (also known as the “Doomsday Glacier”) as the surrounding ocean warms due to global warming. While large calving events used to occur at Pine Island Glacier every four to six years, they’ve now become a near-annual occurrence, according to NASA. In the last decade, huge chunks of the glacier calved away in 2011, 2013, 2015, 2017, 2018 and now in 2020.

As a result, the Pine Island and Thwaites ice shelves are retreating inland faster than new ice can form. Scientists worry that this persistent retreat could be a sign that a runaway melting cycle is in effect: As comparatively warm sea water laps at the newly exposed edges of an ice shelf, melting accelerates, the ice shelf stretches and thins, and further calving becomes ever more likely.

According to NASA, the region around the two glaciers contains enough vulnerable ice to raise the ocean by 4 feet (1.2 meters).