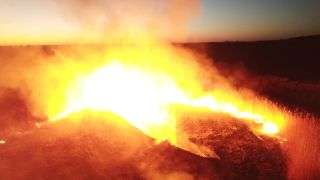 A forest fire is burning in part of Chernobyl’s Exclusion Zone, shown here on April 5, 2020. Ukrainian officials reported a spike in radiation levels due to the fire.

Part of the Chernobyl Exclusion Zone where the infamous power plant explosion occurred in 1986 is on fire, and radiation in the area is spiking.

The fire covers about 50 acres (20 hectares) near the abandoned village of Vladimirovka in Ukraine’s Chernobyl Exclusion Zone, according to CNN. In a Facebook post, Yegor Firsov, head of Ukraine’s ecological inspection service, showed a Geiger counter near the fire reading 2.3 microsievert per hour, a measurement of ambient radiation. The normal reading in the area is 0.14 μSv/h, which is significantly higher than typical radiation levels in other places.

The environmental conditions around Chernobyl are not fully understood, but a 1996 paper in the journal Science of the Total Environment showed that key radiation-carrying elements — cesium, iodine and chlorine — can get picked up by plants and animals in the region and end up in ash when they burn.

“But this is only within the area of the fire outbreak,” Firsov wrote.

In the city of Chernobyl itself, and in more distant Kiev, radiation levels remain normal, according to CNN.

Fires in the exclusion zone aren’t uncommon, according to Firsov’s post. The 1,000-square-mile (2,500 square kilometers) area around the power plant has been largely abandoned since the 1986 meltdown of the Chernobyl Nuclear Power Plant. And in that time, trees and other plants have colonized the area.

Firsov blamed humans for the periodic fires in the zone.

“The problem of setting fires to grass by careless citizens in spring and autumn has long been a very acute problem for us,” he wrote. “Every year we see the same picture — fields, reeds, forests burn in all regions.”

He called for a crackdown on starting fires in the exclusion zone.

Ukraine has met this fire with  water drops from aircraft above and a 124-person firefighting force, according to CNN. Another 14 firefighters are also in the area, fighting a smaller fire. These fires are far from the site of the reactor, which is buried under a thick “sarcophagus” of steel and concrete.

Why prepare for coronavirus to strike the US? It’s your civic...