Home Planet Earth The north magnetic pole is leaving Canada for Siberia. These ‘blobs’ may... 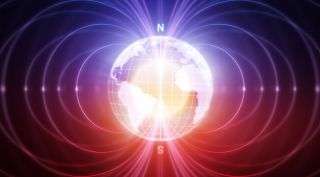 The north magnetic pole is lurching away from its traditional home in the Canadian Arctic and toward Siberia because of a fierce tug-of-war battle being waged by two giant blobs hiding deep underground, at the core–mantle boundary, a new study finds.

These blobs, areas of negative magnetic flow under Canada and Siberia, are in a winners-take-all struggle. Already, as these blobs change shape and magnetic intensity, a victor has emerged; from 1999 to 2019, while the blob beneath Canada weakened, the blob under Siberia slightly intensified, the researchers found. “Together, these changes caused the north magnetic pole to travel towards Siberia,” the researchers wrote in the study.

“We’ve never seen anything like this before,” study lead researcher Phil Livermore, an associate professor of geophysics at the University of Leeds in the United Kingdom, told Live Science in an email.

When scientists first located the north magnetic pole (the point where your compass needle points) in 1831, it sat in the northern Canadian territory of Nunavut. Soon, researchers realized that the north magnetic pole tended to wander, but it usually didn’t stray far. Then, from 1990 to 2005, the magnetic pole’s yearly jaunt jumped from a historic speed of no more than 9 miles (15 kilometers) a year to as much as 37 miles (60 km) a year, the researchers wrote in the study.

In October 2017, the north magnetic pole crossed the international date line and entered the Eastern Hemisphere, passing within 242 miles (390 km) of the geographic north pole. Then, the north magnetic pole began moving southward. The change was so rapid, that in 2019, geologists were forced to publish a new World Magnetic Model, a map that informs everything from airplane navigation to the GPS on smartphones, a year ahead of time.

It was anyone’s guess why the pole was leaving Canada for Siberia. That was until Livermore and his colleagues realized that the blobs were, in large part, responsible.

The magnetic north pole has wandered away from the Canadian Arctic (solid blue line) and toward Siberia for about the past century, but it has considerably sped up over the past 20 years. The international date line is shown as a black dotted line. The data after 2019 are extrapolated lines based on different models. Changing blobs

The magnetic field is generated by swirling liquid iron deep inside the Earth in the outer core. As such, changes in that sloshing iron can change the location of magnetic north.

The magnetic field isn’t confined to the core, however; magnetic field lines “poke out” of Earth, Livermore said. As it turns out, these blobs are the spots where these lines pop out. “If you imagine the lines of [the] magnetic field like soft spaghetti, then these patches would be like a cluster of spaghetti sticking out of the Earth,” he said.

The researchers discovered that from 1999 to 2019, the blob under Canada elongated east to west and divided into two smaller joined blobs, possibly because of a change in the pattern of core flow between 1970 and 1999. One of these blobs had a higher intensity than the other, but overall this elongation “caused the weakening of the Canadian patch at Earth’s surface,” the researchers wrote in the study.

However, these two blobs are in a delicate balance, so “it would take only a minor readjustment of the present configuration to reverse the current trend” of the north magnetic pole’s current trek toward Siberia, the researchers wrote in the study. In other words, a tweak to one blob or the other could send the North Magnetic pole back toward Canada.

Reconstructions of past north magnetic pole movements suggests that two blobs — and sometimes three — have influenced the pole’s position over time. These blobs have prompted the pole to wander around northern Canada for the past 400 years, the researchers said.

“But over the last 7,000 years, [the north magnetic pole] seems to have chaotically moved around the geographic pole, showing no preferred location,” the researchers wrote in the study. The pole also moved toward Siberia in 1300 B.C., according to modeling.

It’s difficult to say what will happen next. “Our predictions are that the pole will continue to move towards Siberia, but forecasting the future is challenging and we cannot be sure,” Livermore said.

That forecasting will rely on “detailed monitoring of the geomagnetic field from Earth’s surface and space in the coming years,” the researchers wrote in the study, which was published online May 5 in the journal Nature Geoscience.