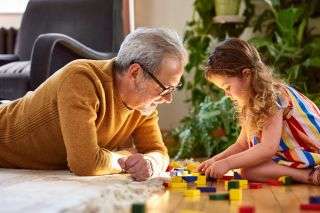 Wondering what the meaning of life is? Good news — you’ll probably feel like you know when you’re around age 60.

That’s the age when people report feeling that there’s the most meaning in their lives, and they have the least need to search for meaning, according to new research published in the January-February 2020 issue of The Journal of Clinical Psychiatry.

The research also found that as people’s sense of meaning in life rises, so does their well-being. “People with purpose in life are physically and psychologically healthier,” said Dr. Awais Aftab, a psychiatrist at the University of California, San Diego, who led the research.

Previous research had suggested that meaning in life is linked to both physical and psychological well-being and even a lower risk of early death, Aftab told Live Science. But almost all research had focused on fairly young adults, with little information on adults over the age of 60.

Aftab and his colleagues used data from a study of adults in San Diego County that deliberately recruited a large number of people ages 70 and older. This survey included a question about the level of meaning people found in their life and the level of their search for meaning. The 1,042 adults included in the study also answered questions over the telephone about their mental and physical health.

Overall, the adults in the study felt that their lives were meaningful, and the level of their search for meaning was fairly low. Overall physical and mental health also matched the average found in previous large-scale studies, and red flags for dementia were low.

The results showed that both sense of meaning and search for meaning tend to rise and fall in U-shaped curves over a person’s life span. Presence of meaning starts low in the 20s and gradually rises to a peak around age 60, on average, before declining again. The search for meaning is a mirror image: It starts high in people’s 20s and drops to an all-time low around age 60 before climbing in older age.

“Young adults in [their] twenties and adults in their thirties are actively seeking out careers, friendships, and romantic relationships,” Aftab wrote in an email to Live Science. “People in their forties and fifties usually have more established careers and relationships; many of them have families and children. The active pursuit for meaning decreases and the perception that their life is meaningful increases. After age 60, these trends begin to reverse. With retirement, bereavement, and increasing health issues, the established sources of meaning in their lives begin to fade and people tend to start searching for other sources of meaning.”

If you’re 60 and feeling uncertain about the ultimate meaning of life, the universe, and everything, don’t panic: Aftab cautioned that the overall curves are based on statistical averages, and individuals show a lot of variation in when their own perception of meaning peaks.

The researchers also found that the presence of meaning in people’s lives was associated with physical and mental well-being across all age groups, and with higher cognitive function in adults over 60. Searching for meaning was associated with lower mental well-being in all age groups and lower cognitive function in the oldest adults.

Man swallows two live eels to cure constipation – but they...